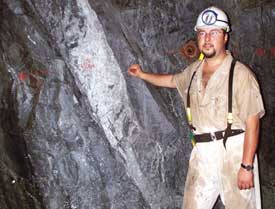 is life possible without oxygen? As far as a particular kind of bacteria are concerned, the answer is an unambiguous yes, according to scientists of the Princeton University, us. In a paper published in the October 20 issue of Science (Vol 314, No 5798), scientists have revealed that a bacteria is surviving 2.8 km below the earth's surface without oxygen, sunlight and in extreme conditions of temperature and pressure.

The community of bacteria derives energy from the decay of radioactive rocks. This is the first group of microbes known to depend exclusively on geologically produced hydrogen and sulphur compounds from the groundwater for nourishment. The extreme conditions under which the bacteria live, resemble those of early earth, potentially offering insight into the nature of organisms that lived long before the Earth had an oxygen atmosphere.

The find has also increased the possibility of existence of life elsewhere in the solar system, particularly in oxygen-deficient planets like the Mars. "The organisms have thrived in conditions considered inhospitable to life. Could these bacterial communities sustain themselves no matter what happened on the surface?" says Tullis Onstott, a Princeton University professor of geosciences and leader of the research team."What excites me is the possibility of life in Mars," he says.

Discovering a new water-filled fracture inside a South African gold mine near Johannesburg, the scientists decided to study subsurface rock uncontaminated by human activities. They descended the hot, gas-choked shafts of the mine to find water seeping from the crack. "The environment we sampled would be much like the Kolar Gold fields--hard rock, very deep beneath the earth's surface--in Karnataka. We just piggybacked on the mining operations," says Onstott.

The temperature at the site is around 60-70 c, with 100 per cent humidity and 20-30 Mpa (Megapascal) (One Megapascal= 10,00,000 pascal) pressure. Methane, hydrogen, nitrogen, helium and other heavier hydrocarbons are commonly found. The most abundant organic carbon (food) in the water originates by an abiotic mechanism.

"We know that the bacteria have been isolated because our analysis shows that it's very old and hasn't been diluted by surface water. Besides, we found that the hydrocarbons did not come from living organisms, as is usual, and that the source of the hydrogen needed for their respiration comes from the decomposition of water by radioactive decay of uranium, thorium and potassium," says Li-Hung Lin Lin, a co-researcher. The team estimates the time frame of the origin to be somewhere between three and 25 million years, implying that living things are even more adaptable than what was thought.

"Scientists are beginning to study the diverse organisms living in the deepest parts of the ocean. The rocky crust is virtually unexplored at depths more than half a kilometre below the surface. The organisms we describe in this paper live in a completely different world," says biogeochemist Lisa Pratt, who led Indiana University Bloomington's contribution to the project.

That subterranean world, Onstott says, is a lightless pool of hot, pressurised salt water that stinks of sulphur and noxious gases humans would find unbreathable. "The radiation allows for the production of lots of sulphur compounds that these bacteria can use as a high-energy source of food," he adds.

The researchers said that the bacteria found it impossible to survive in the presence of oxygen. According to Onstott, some of the first bacteria on the planet may have thrived in similar conditions millions of years ago, and the newly discovered microbes could shed light on research into the origins of life on Earth.

The research team is building a small laboratory 3.8 km beneath the surface in the Witwatersrand region of South Africa to conduct further study of the newly discovered ecosystem. A big question for me is, how do these creatures sustain themselves?" says Onstott. "Has this one strain of bacteria evolved to possess all the characteristics it needs to survive on its own, or are they working with other species of bacteria? I'm sure they will have more surprises for us, and they may show us one day how and where to look for microbes elsewhere."