The World Wide Web may soon hold the "catalogue of life" 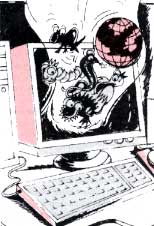 THEY say art imitates life and, occasionally, vice versa. Now we have technology, not imitating life, but listing it. And the technological wonder in question here is the all-pervasive Internet. Net experts say a complete list of the world's known 1.5 million species could be available on the World Wide Web - along with links to every relevant scientific paper - by early next century. The major beneficiaries should be the poorer nations that face severe problems conserving their rich biodiversity since they have so few resources to catalogue it.

The us $300 million project, dubbed most ambitious ever in biodiversity, will link together information stored in museums and research institutes around the world. A description of each species will be hyperlinked to references in scientific papers and information on where the organism is found.

This catalogue of life is known as the Global Biological Information Facility (GBII-) and is the brainchild of a working group of OKCD'S Mega science Forum, which discusses the coordination of science projects too large for any one member nation to handle. Details revealed at an international conference on biological informatics held in Canberra, Australia, recently.

Its proposers argue that the GBIF is essential to conserving the world's biodiversity. Rich nations, which hold most biological information and specimens but are home to relatively few species, can help conservation in poorer-but-biodiversity-rich nations.

"Most countries do not even know what biodiversity they possess, so they can't mobilise their scientific resources effectively to conserve biodiversity," says Jim Edwards of the us National Science Foundation, who chaired the OKCD forum's working group.

But it is not all gain - even the project's supporters are worried about some potential uses of the data. Says Edwards, "What if we provided information to unscrupulous collectors on the whereabouts of last examples of a rare species?"