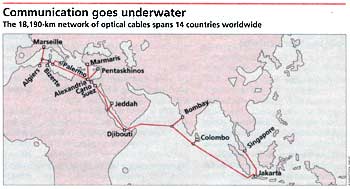 ON OCTOBFR 16, 1994, musicians in Paris, Bombay, Jakarta and Singapore played the tune, We are the world, in perfect unison, while people in the 4 cities watched them on giant video screens. This was possible thanks to the world's longest optical fibre submarine communication cable that was inaugurated in the 4 countries that day.

Known as the South East Asia-Middle East-Western Europe-2 or SEA-ME-WE-2, the 18,190 km long cable ensconced below the seabed extends from Marseilles in France to Singapore, linking some 14 countries in 3 continents. Said B K Syngal, chairperson of the Bombay based Videsh Sanchar Nigarn (VSNL), which is the Indian organisation collaborating with over 50 international organisations on this project, "This cable will facilitate India's integration within the global economy."

Built at a cost of over $700 million, of which India has contributed about S78 million (Rs 250 crore), this cable can carry 60,000 simultaneous telephone calls. Its predecessor SEA-ME-WE-I was the conventional coaxial copper cable, which could carry only some 7,500 calls simultaneously and was much slower. Unlike-the earlier cable which transmitted information in an analog form, SEA-ME-wE-2 transmits information digitally, making for clearer transmission. VSNL experts point out that errors are so few that they are equivalent to a single misprint in several encyclopaedias. Moreover, according to experts at the VSNL, the submarine cable technology may well be better than satellite communication as the former enables transmission of information without delay and free from interference.

Satellite-based communication systems suffer from a delay of nearly a quarter of a second. Moreover, satellites can cover only one-third of the globe at any time, but as this cable is a point-to-point system, communication over longer distances is possible. Experts also point out that these systems are amenable to quick and cheaper repairs than satellite systems, as in the latter case often no back-up satellites are available and so, new satellites have to be launched. Additionally, a satellite's life is usually about 10 years, but it is envisaged that SEA-ME-WE-2 will be operational for at least 25 years.

People have been laying submarine cables for over 100 years. The first cable in India was laid as early as 1870 between Bombay and Aden, to transmit telegraph messages, but cable-laying has now become a great deal more sophisticated. For laying SEA-ME-WE-2, 3 survey vessels equipped with satellite navigation and sophisticated echo sounders surveyed the topography of the seafloor. Hydrological, geological and even biological data was collected and analysed to plot an optimum route. Then, using sophisticated cableships with the latest satellite navigation equipment, the direct segments of the cable - the backbone of the system - were laid in deep water out of harm's way, while branch sections were buried in trenches in the continent al shelf to protect them from fisherfolk and other seafarers. The trenches were dug using ploughs or remote controlled diggers that dig a trench, lay the cable and then cover it all in a single operation. The transmission quality of the cable was constantly monitored while it was being laid, using onboard computers.