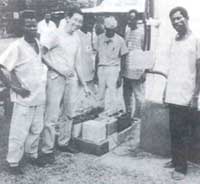 MANY villages in developing countries have partial or virtually no access to electricitv because of unreliable power supply frorn existing grids and prohibitive costs of laying conventional power- lines to remote areas. In addition, the fuel used to power electric generators is expensive. Under such circumstances, can modern health care - for which refrigeration and sterilisation facilities are essential parts of the infrastructure - ever reach remote villages? Yes, say a group of solar energy enthusiasts (Solar Today, Vol 9, No 3).

Health workers of a clinic in Bulape - a remote village in the Kasai region of Northern Zaire - now use solar autoclaves to sterilise medical instruments for their operating rooms, thanks to the efforts of Khahn Dinh, the inventor and developer of solar autoclaves and president of Dinh Solar Co. Inc. The entire project was funded by the Medical Benevolent Foundation (MBF) based in Houston, Texas, which contracted with Dinh to develop 2 autoclaves for the Bulape clinic.

Apart from sterilising surgical instruments, the system produces distilled water for mixing sera and medicines, and the 149 C steam generated by the solar collectors can also be used for cooking. The photovoltaics provide electricity for lighting and refrigeration of medicines - and the result is a modern solar-powered hospital in a village which is so inaccessible that all the solar equipment had to be carried by people on foot for 64 km.

For designing an autoclave, 16 Nippon Electric Glass evacuated tube collectors fitted with aluminium non- imaging reflectors were used to form a Sun-tracking system. Two small photo- voltaic panels power the tracking system that follows the Sun 8 hours a day. Along with another 60 watt photovoltaic panel, the tracking system charges a battery pack, the electricity from which powers the light and refrigeration equipment, and operates 2 water pumps that circulate water from the autoclave to the evacuated tubes. Says Dinh, "Solar thermal and photovoltaic systems have proven,to be reliable and an inexpensive source of energy.

Hank Watt of the MBF says that the Bulape project illustrates how solar energy technologies can be used to address critical needs in remote villages in developing countries without incurring a high cost. Especially in areas with- out electricity supply and regions where electricity service is not dependable, solar technologies should form part of a comprehensive energy strategy.

Taking a cue from the interest generated by the solar autoclave, California-based, SUN Utility has designed a modular stand-alone solar clinic using a steel-studded panelised framing system, The panels are stationed on a cemented slab on a raised foundation. "An average 2,000 square-foot or 186 square-metre solar clinic can be erected in 3-5 days by a localy trained foreman aided by 4 people. The solar equipment is added after the building is in its place," savs Bobby Brooks, director of marketing for SUN Utility.

Local people helped to build and equip the clinic and are trained to operate and maintain the equipment. The idea, argues Brooks, is to increase the impact of solar energy technologies in developing countrie4s, especially for use in areas such as health care and disease prevention. "Accomplishing this requires a holistic approach to village development and integration of solar applications with other technologies," he adds.

Les Haniasaki, president Of SUN Utility which- is now collaborating with West Angeles Community Development Corporation - a Los Angeles-based non-profit religious Organisation which has ties with Africa, opines that the solar clinic can be part of a community centre that could provide, for instance, disinfected water, solar battery recharging and solar food dehidration services. Villpgers could also operate a photovoltaic cells-powered community video and communications centre, he adds.