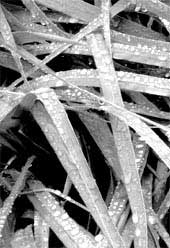 do plants flourish after a storm or do they simply look fresher and greener because they have taken a shower? Since this look of plants cannot be achieved with a sprinkler, the implication is that something more dramatic happens during thunderstorms. Botanists now offer scientific evidence to support this assertion (New Scientist , Vol 155, No 2096).

Researchers believe that plants can detect electricity that accompanies a storm. This electricity allows a plant's metabolism 'to shift into high gear', ready to use the expected downpour for a spurt in growth. Andrew Goldsworthy, a botanist at London's Imperial College says that plant cells can sense electric currents. They may also grow better when exposed to artificial electric fields, provided other environmental conditions are favourable.

Goldsworthy says that plants have a unique power to gear up for a downpour. Water is needed for growth, but if plants waited until rain ran across their roots, the water would be seeping away before they could exploit it. Plants, therefore, have the ability to detect an approaching storm and prepare for growth by switching on the necessary biochemical machinery. In good weather, there is normally a slight voltage gradient in the air around 100 volts per metre. "But this is weak in comparison to the kilovolts per metre that you get in a thunderstorm," he says.

Researchers have been conducting experiments to establish the relationship between electricity and its effect on plant growth. Pioneering thunderstorm researcher Basil Shonland found that currents can pass into the earth through plant tissue. He dug up a tree and earthed it via an ammeter, recording a current of around four microamperes. Karl Selim Lemstrm, a physicist at the University of Helsinki, Norway, carried out several field experiments in which he exposed growing plants to electric fields from overhead wires, creating a voltage gradient of about 10 kilovolts per metre. The wires were not directly connected to the plants, but small currents could reach the plants via ions in the air. The plants flourished under these conditions, producing a harvest almost one-and-a-half times higher than normal.

In the uk, Vernon Blackman, a plant physiologist at Imperial College conducted field trials on oats, barley, wheat and clover-hay mixtures in three different areas of the country. He charged wires above his test plots to between 40 and 80 kilovolts for six hours a day. Blackman was convinced that the electricity was having an effect. Of his 18 field trials, 14 showed increased yield. Nine had yields over 30 per cent higher than expected. Growth in oats and barley went up by 22 per cent as compared with the control plots. Tests on plants in pots seemed to confirm this, with maize and barley plants flourishing under the wires.

Goldsworthy and his colleague Minas Mina studied the currents flowing into and out of tobacco cells growing in tissue culture using a device called a vibrating probe. This device has a vibrating head which picks up tiny voltage differences between two points in space. The experiments revealed that plant cells apparently alter their own currents and bring them in line with those of nearby cells. Further tests showed that cells only respond to an artificial current if their environment contains calcium ions. Goldsworthy's point is that this mechanism could also be used to sense atmospheric electricity, provided the currents induced by a thunderstorm were similar in magnitude to those that cells can detect.

Similar tests in Russia have shown that electric current may trigger germination of seeds such as cherry and barley. This could reflect a natural mechanism by which seeds germinate after thunderstorms, when conditions are right for growth. Researchers believe that seeds would germinate more uniformly if they are exposed to electric current, which would greatly benefit growers.