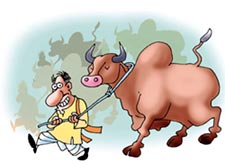 The government of Chhattisgarh is in dire need of 1,00,000 bulls. According to government officials, these are needed to breed cows that are to be distributed free to 1.3 million tribal families in the state. The move is in keeping with a promise made by the ruling Bharatiya Janata Party (bjp) during assembly elections last year. Chief Minister Raman Singh is keen to execute the scheme as soon as possible but he has insisted on a network to back it up. "We need high-performing bulls urgently, at least 100,000 of them, one bull for six-seven cows," said Singh. The government has allocated Rs 25 crore for the scheme in the budget for the current fiscal year. The plan was intended to improve the economic condition of all poor tribal families.

But the government has decided to restrict the scheme to only 6,50,000 families that are in a position to maintain livestock and can benefit from the scheme.