Increasing deformities in frogs attributed to pesticide exposure, which makes them susceptible to parasite infection 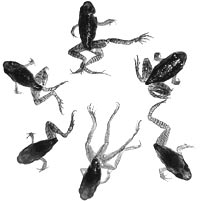 parasite infection combined with a weakened immune system caused by pesticide exposure are causing deformities in frogs in the us state of Pennsylvania, indicates a recent research. The research, jointly administered by Virginia-based National Science Foundation (nsf) and Maryland-based National Institutes of Health (nih), includes the first experimental studies of amphibian deformities conducted in ponds where the animals live.

Since the 1990s, when frogs with deformed legs were first discovered in us wetlands, scientists had been trying to determine the reason for the problem. Various hypotheses came up. The researchers designed their experiments to test these hypotheses.

In summary, the researchers proved that only tadpoles infected with trematodes developed limb deformities and that these deformities occurred with more frequency in the groups of tadpoles that also were exposed to pesticides.