Link found between bacteria in infants and subsequent asthma 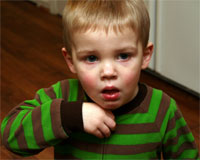 A new study by Australian researchers shows that bacteria inhabiting the air ducts of infants can lead to respiratory problems and asthma later in life.

The research conducted by the University of Melbourne sheds light on the human respiratory microbiome, bacterial and viral cells that reside inside the human body, and their role in causing diseases. The study has been published in Cell Host and Microbe, a science journal.

Asthma affects around 300 million people globally. Many children suffer from respiratory illness and it is one of the most common causes of hospitalisation during childhood.

What does the study say?

The nasopharynx (a part of the throat) is a reservoir for microbes associated with acute respiratory infections (ARIs). According to the study, lung inflammation as a result of ARIs during infancy is linked to development of asthma later in life.

The study examined the microbiome during the critical first year of life in 234 children and documented ARI incidents. It was found that most infants were initially colonised with Staphylococcus or Corynebacterium before the colonisation of Alloiococcus or Moraxella (various kinds of bacteria).

Michael Inouye, a senior author from the University of Melbourne’s School of Biological Sciences, said there was a fast-growing body of evidence to show that the human microbiome plays a vital role in the development of many common as well as rare diseases.

“We know so little about the microbial communities inhabiting us, despite observations, that the human body contains more microbial cells than human cells,” he was quoted in a university press release as saying.

Aim of the study

The study will arrive at strategies to reduce the severity of childhood respiratory illness and the risk of subsequent asthma by using vaccines against viruses and bacteria.

“Changes in the microbiome are associated with many metabolic and immune-related diseases, including now asthma, but further research needs to be done to understand the specific roles that the microbes play,” Inouye added.

Another author, Kathryn Holt, from the University of Melbourne’s Department of Biochemistry and Molecular Biology, said, “One of the most exciting aspects of this study is that it shows that what’s happening in the microbiome of babies impacts not only their health at the time, but may also have long-lasting impacts in terms of asthma development several years down the track.”