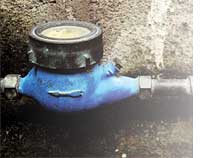 Mangaloreans asked to pay more for less water to help repay loan Flawed policy and politics over water have left Mangaloreans high and dry. The city has been witnessing fights over water pricing, but the people are not convinced these are actually out of concern for them and not for their political outcome.

On August 12, various political parties staged a protest against the ruling bjp's decision to reduce, only marginally, the tariffs for domestic water supply in the Mangalore City Corporation (mcc) area. The decision was arrived at after deliberations at an all-party meeting in June this year. Now the protesting parties, whose representatives participated in the all-party meeting, are demanding that the tariffs be reduced substantially to take them to the rates that existed before September 2007.

The water tariff structure for Mangalore city was revised and prices increased nearly 100 per cent in September 2007. Ganesh Hosabettu, mayor, Mangalore dismissed the protests as politically motivated. mcc justifies the decision "A low tariff structure gives people the liberty to waste water." Says Sameer Shukla, commissioner, mcc "We need money for better services. Going back to the pre-2007 rates is therefore out of the question."

Ranganathan Kini, chairman, committee on finance and taxes, mcc, sums up the economics of water supply in Mangalore "At the present rates, mcc is just about able to break even." The proposed tariff reduction would cost the city corporation about Rs 17 lakh per month, he adds.

According to L Gowda, assistant-executive engineer, mcc, the city corporation serves a population of 0.5 million, supplying 90 million litres per day (mld) of water against a demand of 120 mld. The monthly expenditure incurred by mcc on water supply is around Rs 236 lakh. Of this the mcc spends almost half (Rs 114 lakh) to repay the loan taken from the Asian Development Bank (adb) for improving water supply and sewage management in the city for which Rs 300 crore has been allocated. Mangalore is one of the towns implementing the Karnataka Urban Development and Coastal Environment Management Project (kudcemp) mostly funded by adb. Under this project, mcc is to increase the water supply to 170 mld at the rate of 135 litres per person per day (lpcd) by 2009. Ironically, the present water supply at 90 mld translates into 180 lpcd (population growth).

Analysis shows that whatever is spent by the mcc on water supply is recovered from the consumers--at the rate of about Rs 8.67 per kilolitres (kl). Expenditure works out to Rs 8.74 per kl including the loan repayment.
(See table The loan factor.)

kudcmp project documents clearly indicate that the hike in water tariffs is one of the imperatives of this project. The project recommended an increase in the water tariffs by 100 per cent averaged over all consumer categories by 2005. It also proposed a drainage surcharge to be included in the water tariffs to cover the operation and maintenance costs of the sewerage systems in the city.

There are no sewerage charges for Mangaloreans now. At 80 per cent of water supply the city generates about 72 mld sewage. Only 40 per cent of this can be treated at the two sewage treatment plants (stps) with 27 mld capacity. To operate and maintain this system, mcc spends about Rs 100 lakh per annum--about Rs 1 per kilolitre of sewage treated. Mangalore's sewerage system is now being revamped under the urban development project. The stp capacity would be augmented to 89 mld.

Will the new sewerage treatment infrastructure be able to tackle all the sewage generated by the city? Once the kudcemp water supply project is completed, mcc would generate about 136 mld of sewage as against the proposed stp capacity of 89 mld. The city will then be able to treat only 65 per cent of its sewage.

Once the new stps starts functioning, it needs to be seen how the operation and maintenance costs will be met. Will the mcc then introduce a sewerage charge for treating only part of the sewage?