Literacy as a yardstick of social health 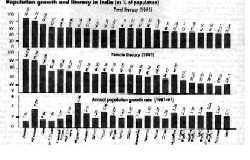 THE LITERACY level of a country both reflects and influences its economic and social status. It also has a close bearing with a country's population growth rate. In India, the Kerala example shows the correlation clearly. Generally speaking, those states that have low female literacy levels have high growth rates, though, of course, there are other factors that influence demography as well. For instance, though Nagaland's female literacy rate of 55.72 per cent is higher than the national average, the state's growth rate is a high 4.5 per cent. Demographers attributed the anomaly to migration, among other factors.

On the world scale, consider what the Somalian government spent on education in 1986, just 0.4 per cent of the country's GDP. The figure is an eloquent yardstick of the quality of life in Somalia. In sharp contrast, the North spent much more on education. The average total expenditure on education by the rich nations of the world worked out to around 5.9 per cent. And Thailand, which has done conspicuously well economically, also shows a high female literacy rate.