Little harvest, less land to till 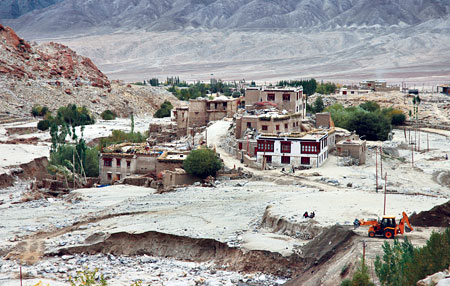 TWO months after a cloudburst and floods destroyed their crops and land, hundreds of farmers in Leh are struggling to make a living. Farmlands in the district of Ladakh are covered with thick layers of dried mud and boulders.

Stanzin Dorjey, 48, of Taru village, one of the worst affected by floods, could not reap any yield from his fields. His 1.4 hectares (ha) of land was damaged by flash floods that followed the worst cloudburst in Ladakh on August 6. Dorjey used to earn over a lakh rupees by growing wheat, barley, pulses and peas but now he is forced to work as a labourer. Similar is the story of the 74 households in Taru and 14 other worstaffected villages along the north bank of the Indus river. The cloudburst in the Himalayan town has left people skeptical about their future. “We were at the peak of progress, with every house having electricity and water supply.

Suddenly it took us several decades back,” said a Taru resident. Others like Sonam Wangchuk, a farmer at Tia village, are scared to live in the area and want the government to provide alternative accommodation.

Floods destroyed 1,500 ha of agricultural land, showed an assessment of the 15 worst-affected villages by the Ladakh Autonomous Hill Development Council in collaboration with Tata Institute of Social Sciences. The report added that with most of the land under debris and boulders, resumption of farming will be difficult, making those solely dependent on it, vulnerable.

The administration is yet to prepare a concrete plan to help people reclaim their land. Officials from the agriculture and soil conservation department who assessed the nature and extent of the damage have divided the affected land into three categories. The division is based on the amount of debris accumulated on the land: less than three feet (A), between three and five feet (B) and more than five feet (C).

 Debris can only be removed mechanically. The department officials estimate it would cost Rs 3 lakh for clearing one ha of land under category A, Rs 4 lakh under category B, while it is not feasible to remove hardened mud in fields under category C. The total cost of clearing debris from 900 ha of fields would be crores of rupees. The administration has no funds except Rs 300 per kanal (1 kanal = 0.0496 ha) under the Calamity Relief Fund. “Rs 300 per kanal is peanuts in recovering the agricultural land buried under thick mud and boulder,” said S S Kapoor, cabinet secretary, Jammu and Kashmir.

In Taru, the administration is clearing debris using the Prime Minister National Relief Fund. The challenge is to clear the land for fresh crop before winter arrives, which seems impossible given that only a few machines are at work. For some like Lobzang Thinless, the wait may be longer. He lost a fifth of his 0.8 ha, but the government’s priority is to provide relief to farmers who lost all their land.

As the vapour content in the clouds was high while crossing the glaciers, they further condensed. The clouds could not retain the water and this led to the cloudburst, the study stated.

“Frequency and intensity of torrential rains have been increasing in Leh. Cloudbursts mainly occur in July or August and since the valley has loose soil, a 30 mm rain can cause havoc,” Sonam Lotus, a meteorologist with the India Meteorological Department, said.