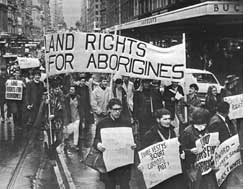 A survey by Australia's culture department last year revealed that the fight for indigenous rights in the country was unknown to most citizens of European descent. The National Museum in the Australian capital Canberra hopes its exhibition on aboriginal activism will help change the state of affairs.

An item on show for the first time is a one of four petitions made on the bark of the Yirrkala tree. The Yolgnu people living near Canberra wrote this petition in 1963 to protest mining on traditional land.

The exhibition will run till October-end.