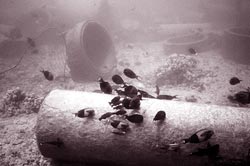 some green algae use signal molecules generated by bacteria to colonise underwater structures like oilrigs and pipes. This was discovered during a study conducted by researchers from Sweden-based Umea University. The finding could have important economic implications: by blocking the molecules, it would be possible to prevent algae like the enteromorpha from colonising on the structures -- a phenomenon that has led to problems like increased friction for ships and degrading pipes.

It is well known that while colonising underwater structures, bacteria cover them with a thin layer of slimy material, which is known as biofilm. Bacteria coordinate activities of their cells within this biofilm by producing signal molecules, such as n-acyl homoserine lactones (ahl).

But even algae make use of these signal molecules. The algae reproduce in water by generating mobile microscopic zoospores. These spores seek out suitable surfaces on which the algae can reproduce. After finding the desired surface, the spores excrete an adhesive molecule that permanently fastens them to it. Thereafter, a new alga is produced that grows on the surface.