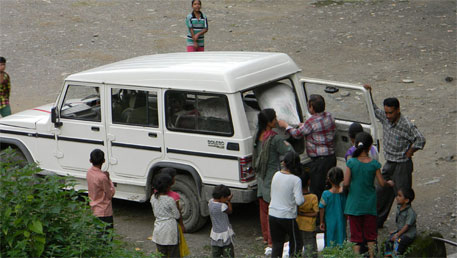 People who lost their relatives and property in the Uttarakhand flood disaster in June this year are finding the going difficult with little help coming from the state government. Sushma Devi of Giriyagaon near Guptkashi, Rudraprayag district, thought herself lucky when she received a bag of rice that a government official was distributing to the flood-affected people in her village. Each bag contained a photograph of Rahul Gandhi in it. But to Sushma Devi’s dismay, when she opened the bag, the rice in it was rotten.

In another village in the district, Lamgondi, people received bags of bleaching powder instead of the flour they were supposed to get. A resident of the village, Mohan Rautela, said he was so angry that he threw the bag he got into the river. Thirty such bags were distributed in his village that contained bleaching power.

When asked about these incidents, Rudraprayag district magistrate, Dilip Jawalkar, said these were just rumours. However, an official in the district administration said on condition of anonymity that parliamentary elections are round the corner and it is not a big thing that the bags had photos of Rahul Gandhi. “The village (Lamgondi) got bleaching powder instead of flour because the truck that was supposed to take bleaching powder to areas where large number of people have died were given wrong address,” he said.

People in many areas are having a difficult time obtaining rations. Padam Singh, who is among the very few people to survive the disaster that struck Sobla village in Darma Valley in Pithoragarh district—it wiped out the entire village—has to walk 40 km every alternate day to get ration supplies. “Helicopters dumped ration in our locality on July 1 or 2 but the patwari is still making list of people eligible for the ration and the amount each family should get,” he says.

About 288 quintals of foodgrains dumped by the helicopters are rotting in godowns at Seraghat in Munsiyari block in Pithoragarh district. According to former president of Kumaon Mandal Vikas Nigam, Rudra Singh Panda, on July 28, about 288 quintal ration was sent to Gorichhal area to be distributed among 3,000 affected families in Sirtola, Tanga, Golfa, Bouna, Seraghat and Shiling villages of Munsiyari.

However, even after a month, the ration has not been distributed among the affected people. While wheat has started catching mould, sugar is turning into syrup in the damp rooms. The rice and other commodities are now infested with insects, says Panda.

“We have requested officials again and again during our visits to the town to distribute the ration in stock but each time they promise us it would be done soon. It has been a month and we see ration rotting in front of us,” says Rajendra Dami, resident of Seraghat.

Several roads connecting Munsiyari to Pithoragarh town are still damaged. The roads that were damaged during the June floods and landslides are being repaired at a snail’s pace. However, heavy rains are triggering landslides at a number of areas damaging roads that were in decent condition after the disaster in June.

“If NGOs had not come to give us food and tents, we would have starved,” says Komal Devi in Gothi, Dharchula subdivision of Pithoragarh district where people are facing similar problems.
People in areas that have been cut off from the town and administrative headquarters are still facing extreme difficulties in getting food commodities. Villages like Hora, Goula, Khoyam, Jerthi, Sairanthi, Berumahar, Kimkhet, Chami Bhainskot, Malla Bhaiskot, Basani, Nachni, Vyas Valley, Chowdas Valley and Darma Valley are the worst effected in Pithoragarh where relief is still awaited. According to the disaster control room, several arterial roads are still closed.

The Food & Civil Supplies Department of Uttarakhand claims to have provided a total of 1,756.35 quintal wheat to villages of Pithoragarh district from July 1 till August 19. Since the road to FCI godowns in Dantu and Gunji are damaged and would take about a month more to restore, the ration is being stocked in school buildings and is being sent through helicopters. In Munsiyari, the grains were stocked in gowdown in Burfu.

Neeraj Kherwal, district magistrate of Pithoragarh, said that foodgrains had already been airdropped to the areas that were cut off during the floods in June. The ration that is now being stocked is for the next two months. “There is a proper way of distribution. First the ration would be stocked then we will send officials from district headquarters to look into proper systematic distribution,” he said.

On being asked whether the officials would be sent by helicopters to these villages to oversee proper distribution, Kherwal said that their target to get roads in walking condition is September 20.