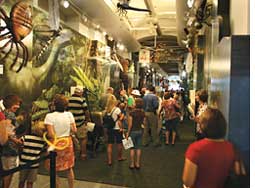 For the ancient Egyptians, the sacred scarab symbolized resurrection and self-invention, the power to tunnel out from the tar-pit grip of the earth and back into the agile light of morning. Who better to counsel rebirth in the wake of inundation and obliteration than a civilization built on the flood plains of the Nile? Information such as this is in abundance at the new Audubon Insectarium, a US $25 million nonprofit venture in New Orleans. Audubon is the largest museum in the US devoted solely to insects and their arthropod relations. It is also big on special effects, most notably a so-called 4-D movie theatre where audience are treated to a multisensory experience as they watch an insect-themed cartoon with voice-overs by Jay Leno, Joan Rivers and other celebrities. One mesmerizing time-lapse movie clip at the museum shows the industrious recycling of a rat corpse, as a fly lays her eggs in its blinded eye, and maggots boil out and reduce the carrion to a memory of fur, and, finally, fresh green shoots spring up from the fertilized ground. Insects remind us that the wheel of life keeps spinning.