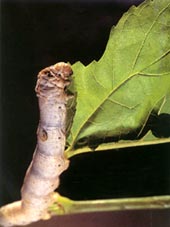 mulberry silkworm maggots can now offer a cheaper and simpler way to produce vaccines against two afflictions that plague the Indian livestock. Scientists from Bangalore-based Indian Institute of Science (iisc) have converted the silkworms into vaccine-producing factories by infecting them with a transgenic virus. The development is significant, as the diseases caused by the rinderpest virus (rpv) and peste des petites ruminants virus (pprv) account for a large number of cattle deaths in India and other tropical countries.

To make the vaccines, the iisc scientists exploited the genetic mechanism of the virus called Bombyx mori nucleopolyhedrovirus (bmnpv), which otherwise causes large-sale economic losses to sericulture farmers. "The virus contains a gene known as gp64, which is capable of protecting 'foreign genes' from being rejected when inserted in a 'host' organism," explains K P Gopinathan, who led the research effort. Working together with M S Shaila, an iisc professor who has been specialising in cattle diseases, Gopinathan and his colleagues introduced viral genes (that offer immunity against the diseases) in the gp64 gene system. Thereafter, the gp64 system was inserted in the bmnpv virus. Due to the presence of the gp64 gene, the immunity-conferring genes were accepted by the immune system of the virus.

The antigens (immunity-offering substances) were expressed in large quantities in the larvae, when infected with the transgenic virus. "The antigens can be easily isolated and purified," says Gopinathan. The technology can emerge as a viable source of income for sericulture farmers -- companies can hire them to rear the silkworms.