The insect dislikes crops rich in nitrogen and proteins 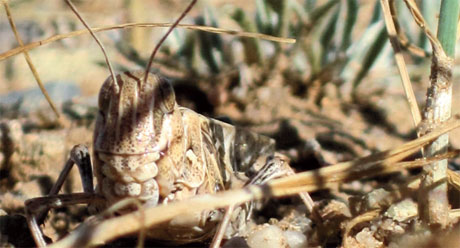 THE last big outbreak of locusts on farms might have been in 2004 in Africa but there is enough anecdotal evidence to show that there has been an increase in smaller attacks by them in the past decade.

Oedaleus asiaticus is one of the locust species responsible for the smaller attacks. But now there may be a way to control them. A recent study has shown that Oedaleus asiaticus does not like crops with high nitrogen.

The study by Arianne Cease from Arizona State University in the US and colleagues was carried out at the Inner Mongolia Grassland Ecosystem Research Station in China. In this area overgrazing has led to soil erosion, resulting in nitrogen depletion in the soil, and reduction in the protein levels in plants.

As locusts travel in swarms to seek out better food sources, the researchers fertilised experimental plots with nitrogen. They expected that with higher nitrogen increasing the amount of protein in the plants, the locust would grow faster and form swarms easily. But the locusts either died or grew slowly. The researchers looked for an answer to this and found that locusts were eating plants only with low nitrogen growing in unfertilised plots.

The team then tried to explain this in lab conditions. Locusts were offered six most common local plants collected from unfertilised plots. These consisted of five grasses and one sedge, grasslike plants having solid stems. Stipa grandis, the grass with the lowest nitrogen content, was the most highly consumed over 36 hours. Then the researchers compared food selection over eight hours between nitrogen-fertilised and unfertilised Stipa. Locusts strongly favoured unfertilised Stipa.

They also fed the insects chemically defined diets and studied their growth rates. Here, too, they found that the locusts preferred low protein, high carbohydrate diets. Specifically, they liked diets which had one part protein and two parts carbohydrate.

The findings could lead to better land management for agriculture. “Outbreaks of locusts can easily be minimised through various land management practices that would slow soil erosion. Encouraging nitrogen-rich plants would fall under that plan,” says Cease. She adds that if locust swarms are identified when they are still juveniles targeted application of nitrogen fertilisers could also be of help to control their spread. But she cautions that largescale use of nitrogen is not financially feasible and may harm the environment. “If the land is severely degraded and undergoing desertification, throwing nitrogen on it is not going to solve the problem. Changes in management strategies need to occur before that point,” says Crease.

The team now plans to do comparative field studies on other Oedaleus locusts. There are about 20 grasshopper species that are considered locusts. During an outbreak year, locusts can populate over 20 per cent of the Earth’s land surface, affecting more than 60 countries and livelihood of one out of every 10 people. The study was published in the January 27 issue of Science.