By lifting a ban raw wood export and levying a huge tax on it instead, officials in Jakarta have come under fire from both loggers and environmentalists 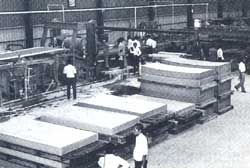 THERE is really pleasing no one. Last month, the Indonesian government lifted an eight-year ban on export of raw wood -- and came under fire from both environmentalists and business interests. The ban was lifted in response to a demand by the General Agreement on Trade and Tarriffs (GATT), which branded the ban a violation of free trade and a non-tariff barrier. Jakarta imposed the ban in 1984, saying its forests were threatened, but European countries cried foul, contending the ban would only protect the Indonesian wood processing industry.

The government will now allow wood export, but has imposed a formidable tax ranging from US$ 1,000 to US$ 4,000 per cubic metre (cu m) on logs, depending on the wood species. When the ban was imposed eight years ago, the tax rate was a mere US$ 10 per cu m, on all species.

Justifying the move, Indonesian trade minister Arifin Siregar was quoted by the Inter Press Service as saying the high tax was aimed at protecting the domestic wood and rattan processing industries and to discourage indiscriminate logging. GATT norms allow tariffs such as a high tax or high duty rates as barriers, but frowns on non-tariff barriers, such as bans.

On the other hand, the wood industry is angry, contending high taxes will price Indonesian timber out of the international market. For instance, the export tax on meranti wood -- a prime, Indonesian tropical timber -- is US$ 1,000 per cu m now, compared with its price in Malaysia of US$ 150 per cu m. Imam Churmen, a member of the Indonesian house of representatives, retorted high taxes would only encourage smuggling in raw timber and Representative Anwar Hussein argued the new tax rates benefit the "big- time" loggers because they have the sawmills and the staying power to decide, depending a market trends, whether to sell their stock as raw wood or wood products.

Environmentalists, on the other hand, insist the high taxes will not deter loggers and criticised the opening-up of export as actually being a "licence" to log more trees in easily accessible national parks.

In the wake of the 1984 export ban, the indigenous wood- based industry grew rapidly in Indonesia and today it commands 50 per cent of the world's plywood market. Raw timber production dropped by almost 35 per cent, Abdon Nababan reports in Environesia (Vol 6 Nos 1-2). The export of timber products grew rapidly -- in 1989 it earned more than 15 per cent of the total exports and 27 per cent of non-oil earnings. But, Nababan warned this success was not due to superior entrepreneurial skills but because of the "undervaluation" of forest resources. This, he stressed is the cause of Indonesia's continuing forestry crisis.

Indonesia has about 108 million ha of forests, of which 70 million ha consists of tropical rainforests that form 10 per cent of the world's rainforests. Many of the region's species of mammals, birds and thousands of varieties of plants are rare and endemic to these forests. Nababan voted that Indonesia's dependence on timber exports grew as the global prices of crude oil and gas fell, Through the 1970s, Indonesian foreign exchange earnings depended largely on petroleum and gas sales.

The Indonesian government estimates about 9 lakh ha have been deforested annually between 1970 and 1989, while the Food and Agriculture Organisation the loss is closer to 13 lakh ha between 1982 and 1990. Environmentalists warned even though FAO's figure may be inflated because of a catastrophic fire in East Kalimantan, Indonesia's forests are in worse shape than the government admits.

In the greed for quick returns, timber is sold at virtually throwaway prices, which average in Indonesia at about half the prevailing price in nearby Malaysia. This only encourages illegal and rapid logging in Indonesian forests. Nababan contends prices are kept artificially low and this policy from late 1960, led to the government giving logging concessions to generals, who supported the then transfer of power, and to other well connected entrepreneurs.

This system of granting forest logging concessions was called Hak Pengusahaan Hutan - (HPH). By 1990, there were 575 HPHs covering 60.36 mha, roughly 60 per cent of Indonesia's forest area. It is the same logging concession holder - a powerful group -- who set up in the early 1980s wood processing units to capture the added value of wood products. This vertical consolidation of power, says Nababan, has meant a "quasi cartel" determining log prices "in a way that does not reflect either the scarcity value of tropical timber or the externalities involved in exploitation". Between 1983 and 1989, the forestry business grew 1.7 per cent annually, but still accounts for just 1 per cent of the country's Gross Domestic Product (GDP). Forestry has also created few jobs in the formal sector -- just 0.3 per cent of all employment in the country, though employment in illegal operations is believed to be much higher. Nevertheless, the Indonesian government, wanting to encash quickly on timber industry profits, issued permits to wood processors regardless of how this would affect forests. Wood factories multiplied and their capacity today is much more than the wood that can be legally cut. The 1992 capacity of the industry is 53.5 million cu m, but legislation limits the tree-cutting to just 31.5 million cu m. The shortfall has only encouraged illegal timber felling to feed the units.

Even the legal HPH concessionaires are reported to be shy of the truth in reporting turnover and other relevant commercial data to the government for purposes of calculating various levies. According to an economic research team of the non- governmental Indonesian Environmental Forum (WALHI), the government collected only as little as 8 per cent in 1989 and 17 per cent in 1990 of the total potential revenue from logging. This further aggravates logging activities because the government is more eager to sanction additional leases than to audit the returns of existing concessionaires.

The government's numerous regulations governing forest rehabilitation and management have not had much success, largely because of poor supervision. The ministry of forestry concedes only 3.8 per cent of the concessionaires follow regulations. Observers said forests are logged and then left to degrade as the loggers move to yet another area. By 1990, only 1.2 million ha -- just 4 per cent of the logged area -- had been rehabilitated by replanting.

Logging has also increased the risk of forest fires because the high humidity in tropical forests used to keep this danger at bay. But logging has reduced the forest canopy, lowered humidity and let litter dry out. Forest fires in the last decade are estimated to have claimed an average of 50,000 ha of forest annually.

If this enormous subsidy were to end, Nababan estimates, the government could earn more than 5 times the present collection. "This hidden subsidy which is provided by the environment and the local communities distorts priorities, as it focusses on the impressive performance of the logging industry", Nababan said. This must stop, he maintained, if the government is serious about protecting forests -- and not just the timber industry.

Clearly environmentalists are not waiting to see what effect the lifting of the ban on logging for exports will have on forests -- they already fear the worst.