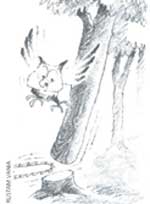 LOGGING may resume in the forests of Seattle in USA after a 3-year ban, but on a limited basis. Judge William Dwyer had issued the logging ban in 1991, after environmentalists had filed a lawsuit against the erstwhile Bush administration for "deliberately refusing to comply with the laws protecting wildlife". They were convinced that the government's policies were threatening endangered species.

The Clinton regime, which has asked for the injunction to be lifted, claims that its new plan permits much-restricted logging, which will ensure the preservation of the forests and the threatened wildlife within it. Nevertheless, conservationists are worried about the forest cover that will still be left to the mercy of the loggers and are clamouring for measures to tighten the plan.