GoM gives in to public pressure 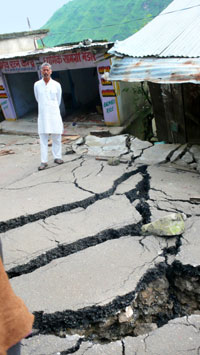 THE three-member Group of Ministers (GoM), reviewing the construction of dams on the Ganga, have scrapped the Loharinag Pala hydroelectric project in Uttarakhand.

The August 20 decision comes after protests by socio-religious groups and environmentalists against the 600 MW project on the Bhagirathi, a Ganga tributary. They said the river would vanish from its course and run only through tunnels if the project gets completed.

The GOM said a special technical committee should be set up to recommend measures to safeguard the area's fragile ecological balance. By axing the project, the GoM reversed its own decision. On July 8, the ministers had decided to allow the dam's construction as the project proponent, National Thermal Power Corporation, had spent `600 crore. This led to G D Agarwal, former member secretary of the Central Pollution Control Board, to go on indefinite hunger strike on July 20. He had gone on hunger strike twice earlier to force the Centre to drop the project (see 'Protests resume at Loharinag Pala', Down To Earth, August 1-15, 2010.)

People who were earlier endorsing the project have also turned against it. Blasting carried out at the power house project site at Pala village had a disastrous effect on Bhatwari town, said Mallika Bhanot of Ganga Ahawan, one of the groups campaigning against the project. The town is a major settlement between Uttarkashi and Gangotri. The blasting has rendered the area fragile and the road leading to Gangotri caved in on August 15, she said.

On August 3, chief minister Ramesh Pokhriyal wrote to the prime minister, asking him to axe the project.