Competition, not predation, is the most influential process that shapes food web

FOR centuries scientists have applied one golden rule to maintaining balance in an ecosystem—remove the invasive species. This rule may change soon. 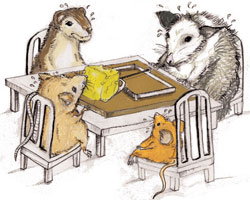 A study has found that simply removing an invasive species, particularly a top predator, need not augur well for the invaded ecosystem; a complex ecosystem is never just about the predator and its prey. Position of prey in the food web is regulated more by what it eats than who eats it.

A team of scientists led by New Zealand-based ecologist Wendy A Ruscoe investigated the consequences of the removal of top predator from a four-species food web comprising stoats, rats, possums and mice.

Stoats are common top predators in forests of New Zealand. They usually prey on rats which, in turn, compete with mice and possums for food. But possums give rats really tough competition. Mice do not compete with possums and stoats have no dietary interest in them either.

Based on outcomes of a previous simulation model, the team tested three established points: if reducing the stoat numbers would result in an increase in rat numbers, if reducing the number of possums would allow the rat numbers to go up, and if the mice numbers would shoot up in the absence of rats. The team chose four locations in the forests of central North Island and assigned two study sites to each location. Two sites at the first two locations were randomly assigned to either possum removal or possum and rat removal. The other sites were subjected to either control or stoat removal.

The study, published in Ecology Letters in October 2011, shows that rat numbers were regulated more by competition for food with the possums rather than by predation. Going by the rule, if stoats were removed simply to give the rats a chance, the attempt would be a failed one.

So should one stop trying to manage invasive species? “Invasive species must be dealt with but understanding the consequences of removal must be considered beforehand. For example, invasive goat removal has affected native vegetation in these islands because the goats’ absence was responsible for increase in invasive weed species,” explains Ruscoe.

Asked whether the study applies to the recent removal of invasive Giant African snails in Kerala, TV Sajeev, scientist with the Kerala Forest Research Institute, replies, “We have not come across multiple species interactions with the Giant African Snail; neither did we find native species with the potential to replace the snail in the food web. The rule is that management of an invasive species is best done immediately after the invasion. When it has established itself, launching a single species eradication programme is not a good idea.”