Look out for the elephants 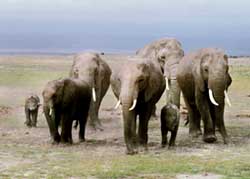 A searing drought that threatens livelihood of millions of people in East Africa is also leading to a human-elephant clash.

The search for water and food is drawing elephants in the Kenyan National Park and other reserves, close to human settlements and crop fields. Elephants have killed two people after leaving the Tsavo West National Park, said Connie Maina of the Kenya Wildlife Services (kws). Encounters have also been reported from Lamu, Laikipia and Narok districts, she said.

Members of kws's Problem Animal Management Unit have been deployed in affected areas. "We are trying to do ground and air patrol to ensure that the problem animals do not cause any havoc and to try to drive the elephants back to the park," said Maina.

More than 5 million people in East Africa are facing famine because of drought, the worst in 22 years.