Sperm density is reducing in the US and Europe, says a new analysis of 101 studies 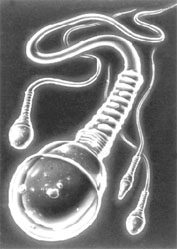 sperm density among residents of the us and Europe is on the decline, says a recent analysis of 101 studies from 28 different countries, published between 1938 and 1996. But the analysis finds no decline in the sperm density in the 'non-western' countries. The analysts say that environmental problems may be one the reasons for the decline.

The analysis grouped the studies in to three categories; those conducted on residents of North America, residents of Europe and nations in other parts of the world, including India, Australia, China and Brazil. Each study had used at least 10 men for sample testing. The analysis used statistical techniques like multiple regression to remove any biases and errors that may have crept in to studies conducted using various techniques. The study reveals a 1.5 per cent decline in sperm count per millilitre of semen in the us and a decline of 3 per cent, on the average, in Europe over the 58-year period.

The issue of declining sperm count has gained importance in view of other studies showing decline in reproductive health of males, primarily in the western countries. The rate of testicular cancer has risen in the past 20 years in Caucasian populations studied. Also, the rate of incidence of male genital disorders has increased in Western nations.