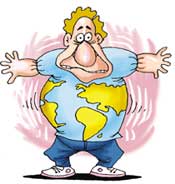 What do clothes and countries have in common other than the fact that both start with the same letter? Both can shrink, according to a US seismologist.

Roger Bilham of the Colorado University in the US says Nepal is shrinking by 18 millimetre (mm) each year as a result of the Indian tectonic plate pushing against the Asian plate. "This is equivalent to the loss of two soccer fields a year along its 600 kilometre-long northern border (with Tibet)," he remarks in a report based on global positioning system (commonly referred to as GPS) measurements.

Such movements of tectonic plates can cause earthquakes in the Himalayan region. "Several earthquakes measuring more than 8 magnitude (on the Richter scale) may be overdue," says Bilham. But little can be said about when they might strike.