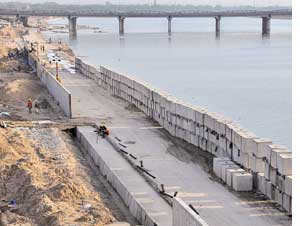 Construction of an embankment along the 10-km stretch of the Sabarmati has begun in Ahmedabad despite warnings that it may hamper natural drainage in the city and that its design is inherently flawed.

The 8.5-m-high embankment is part of the Sabarmati Riverfront Development Project, the first in India where the river will be squeezed to yield land for commercial, residential and open spaces. Project planners expect to recover the cost by selling this real estate.

The project's Environment Impact Assessment (eia) report, however, said that embanking the Sabarmati would not just prevent drainage and "cordon the river away from the people". It would also increase its speed, thereby increasing erosion that would affect the stability of the retaining walls and bridges. The report was prepared by the Ahmedabad-based Centre for Environmental Planning and Technology and the Gujarat Ecology Commission in Vadodara. Project designer hcp Design and Project Management Pvt Ltd, formerly called Environmental Planning Collaborative, said drains from low-lying areas would be directed to the river through underground channels. The riverfront project was proposed in 1997 to develop the banks into recreational zones.

But will it? The Sabarmati is a monsoon river that remains partially dry for most part of the year. But for water from the Narmada canal that met it upstream of Ahmedabad, the Sabarmati lacked aesthetic appeal, noted the eia report. "It (riverfront) is unlikely to be an inviting public place conducive to cultural and recreational activities," eia said.

Inspired by the riverfront development of the Thames in London, the Sabarmati project envisaged channelizing the river into a uniform width of 275 m from the varying 330m to 382 m. Ahmedabad residents feared that constricting the width of the river, would raise the water level. During the 2006 floods, the water level had reached almost the base of the bridges. According to project consultants who prepared reports on flood estimation, the increased speed of the river will bring down the highest flood level. Nonetheless, the Ahmedabad Municipal Corporation plans to raise the height of bridges with a hydraulic jacking system.

Two consultants were put on the task of flood estimation in the Sabarmati. C C Patel and Associates estimated a peak flood of 0.525 million cubic feet per second (cusecs) and Sheldia Associ ates India estimated 0.594 million cusecs. They recommend building embankments that can withstand a flow of up to 0.475 million cusecs. "Considering the rainfall may not be uniform over the catchment area, they (consultants) have suggested a reduction of 10-20 per cent.... This may have serious implications in case of recurrence of most unlikely event of 5.9 lakh cusecs (0.59 million cusecs) flood," the eia report said.

eia had suggested terraced or sloping embankments. "Sloping embankments offer greater resistance to flood water by helping dampen the flood velocity, dissipate the impact of floods over a much larger surface area and withstand hydraulic pressures several times higher than vertical embankments such as the ones proposed in the project," it said.

The flood estimation studies were done before 2002. Since then the rainfall pattern has changed. In August 2006, a flash flood washed away slums and damaged pathways constructed along the river in the first phase of the project. The peak discharge in the river then was less than 0. 3 million cusecs and the estimated loss, Rs 20 crore. "The retaining walls will protect the city against greater floods," said an official of the Sabarmati Riverfront Development Corporation Ltd, set up by the Ahmedabad Municipal Corporation to oversee the project.

Environmentalists are sceptical. "They haven't learnt lessons from the Kosi. Embankments can never stop floods," said Anupam Mishra, who heads the environment division of Gandhi Peace Foundation in Delhi.

Riverfront development on the Tapi was put on hold after floods in Surat in 2006. Biswaroop Das, faculty member of the Centre for Social Studies, who co-authored a citizens' report on the Surat floods, said Indian rivers could not be compared to the Thames and the Hudson. "Our rivers are monsoon-fed, while there's are snow-fed rivers. Why don't the planners understand this simple fact?" he asked.