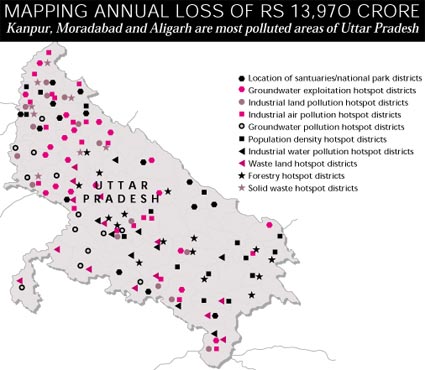 uttar Pradesh is incurring huge losses because of environmental degradation, indicates a recent assessment. The analysis will play a crucial role in determining the fate of the state's environment -- on its basis, the Planning Commission will decide the amount of funds to be allocated to the state to combat environmental problems. The funds are being given as part of the Union government's project 'Facilitating State of Environment Reporting in India'. The money will be utilised as per an action plan of the Union ministry of environment and forests and the state government, which will be formulated under the project.

The World Bank financed the assessment that was conducted by researchers from three organisations: Institute for Environmental Studies, Vrije Universiteit, the Netherlands; Metroeconomica Limited, the uk; and the Administrative Staff College of India, Hyderabad.

It provides information on the geographical distribution of the pollution problem in the state (see: Mapping annual loss of Rs 139.7 billion). The most affected areas are Kanpur, Moradabad and Aligarh. The researchers used data from studies conducted by government agencies and research organisations to assess the situation. They took into consideration seven major environmental problems: water pollution, water shortage and flooding, urban outdoor air pollution, indoor air pollution, disposal of solid waste, forests and biodiversity loss, and land degradation. However, only economic losses due to water and air pollution could be calculated, as the required data for the rest was not available. The losses were calculated with the help of disability adjusted life years (daly) -- a measure of the burden of diseases that combines life years lost due to premature death and fraction of years of healthy life lost as a result of illness or disability.

Considering the value of each daly to be Rs 15,000, the researchers calculated the loss of gross domestic product per person for the year 2002. They found that the total cost of pollution was Rs 13,970 crore -- Rs 9,600 crore attributed to water pollution, Rs 620 crores to outdoor air pollution and Rs 3,750 crore to indoor air pollution. The loss is substantial for the state as its annual growth rate has been declining -- from 5.3 per cent between 1981-82, it fell down to 4.3 per cent in 1991-92.

The increasing pollution has been linked to a liberalised industrial policy, increase in energy consumption, population growth and rapid urbanisation. The number of industries in the state has increased five times during 1984 to 1999. Nearly 99.4 per cent of these are small and medium scale enterprises. "Moreover, agencies like the state pollution control board have not taken substantial steps to combat the problem," says Thilotham R Kolanu of the Administrative Staff College India.

The assessment was reviewed by Development Alternatives, a New Delhi-based non-governmental organisation (ngo), which is helping the Union government to formulate action plans to combat pollution in all the states. "The plan for Uttar Pradesh is likely to be out in the next three or four months. It would most probably focus on two or three main environmental issues of the area," reveals Charu Jain, an environment scientist with the ngo.