A STATE government study has blamed unscientific and haphazard land reclamation for ecological damage and perennial floods in Mumbai. The city has a 300-year history of land reclamations—prior to independence, over 35 sq km of land was reclaimed by the colonial administration to link the erstwhile seven islands of Worli, Parel, Mahim, Mazagaon, Bombay, Little Colaba and Colaba. But the highest number of legal and illegal reclamations have been done in the past 40 years, many a time leading to controversies, shows “History of Reclamation”, the first report of the four-part study, “Land Reclamation in Mumbai”.

According to the study conducted by the state government-run think tank, Mumbai Transformation Support Unit (MTSU), the total built-up area of the city has shot up from 195.01 sq km in the 1970s to 385.67 sq km in 2011. This ate into over 50 per cent of Mumbai’s beaches, lakes, vegetated islets, hillocks, inter-tidal zones and mangroves, causing irreparable loss to natural landscape. “As much as 54.73 sq km of Mumbai’s land is under the process of reclamation as observed in a satellite image of 2012,” says the study. 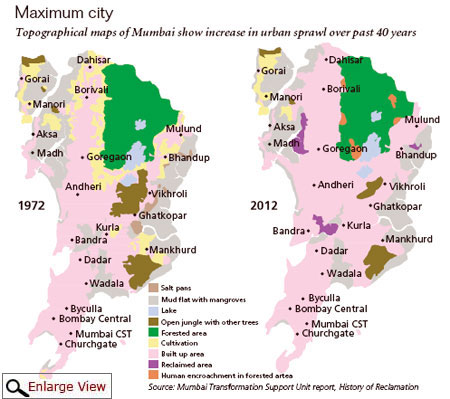 “Reclamation is an unnatural process because you are interfering with coastlines delineated by nature. So unless you understand how nature has programmed its processes and how coastal features have developed, reclamation will be difficult,” says V Subramaniam, former professor of geology at IIT Mumbai, who is associated with the study. He cites the example of unscientific reclamation at Mahim Bay for the Bandra-Worli Sea Link that led to the destruction of Dadar beach. “They did a rush job for the sea link. You cannot do it (reclamation) today and start using the reclaimed area tomorrow,” says Subramaniam.

He explains that beach erosion, transportation of the sediment so released and deposition of this sediment at specific locations is always happening on the western coast. However, since this was not thought about and the Mahim Bay was filled in a hurried manner, erosion process shifted to the Dadar beach.

The study makes another startling revelation: 54.73 hectares of land was reclaimed for urban development in 2012 even though many multi-crore-rupee projects involving massive reclamations have not yet taken off the drawing board. Several projects, like additional Central Business District spread over 30 hectares in South Mumbai and a tourism destination in Back Bay area, have been proposed in the Concept Plan for future development of the larger Mumbai Metropolitan Region and have courted controversy due to the harmful impact they would have on the ecology and the residents of these areas.

An expert associated with the study, Hrishikesh Samant, who is the head of the geology department at St Xaviers’ College, blames forcible diversion of the Mithi river channel for perennial flooding. “During the early 1970s, Boeing 747 entered India. This created a need for extending the second runway of the airport. However, since the Mithi river’s wide channel was flowing there, the authorities reclaimed large parts of the channel and forced it to flow under the runways.” This makes the river flood substantially, as was seen during massive floods of July, 2005, adds Samant.

The remaining phases of the study will look into the economic benefits and social and ecological impacts of land reclamations. A senior MTSU official says the remaining reports are likely to throw up more unsavoury facts but might help in planning an integrated coastal development and management policy.
News News News Mumbai Mumbai Mithi Mangroves Mangroves Mangroves Land Reclamation Floods Floods Environment Down to earth
SUPPORT US