Could the j&k government have averted snow tragedy? 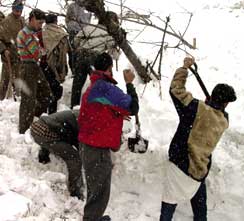 a controversy has erupted over the advance snow warning system in Jammu and Kashmir (j&k). After the snow tragedy struck the state, leaving 278 dead and scores missing, the state meteorological centre claimed it had issued warnings of heavy snowfall that should have alerted the state government to face the crisis. But the government denies receiving any warning.

"We do not issue warnings about avalanches. We issue warnings about heavy snowfall. We issued a warning and forecasted heavy snowfall from February 17 to February 29, 2005. On February 18 and 19 we issued specific warnings of heavy snowfall. These forecast bulletins were sent to the media, police control rooms and the divisional commissioner's office. It should have at least alerted the government," says G K Mohanty, director of the meteorological centre. But Srinagar deputy commissioner Shalender Kumar contradicts Mohanty: "We did not receive any warning. We never saw the forecast in any newspaper. There were no warnings. Otherwise we would have geared up to deal with the crisis."

With no contingency plan to tackle the crisis, the state government declared it a natural calamity: "Death and destruction due to natural calamity cannot be prevented. But we have left no stone unturned to overcome hardships faced by the people in the wake of unprecedented snowfall and incessant rains," said j&k chief minister Mufti Mohammed Sayeed. Snowfall of such a magnitude occurred in the Kashmir valley and some parts of Jammu for the first time since 1988.

The snowfall in upper reaches and forest areas led to the migration of wild animals towards residential areas. Reports said these animals mauled several people. Regional wild life warden, Kashmir, Mohammed Shafi Bacha, says there is a vertical movement of wild animals during heavy snowfall and other natural calamities. "This is a natural process. Not only has snow disturbed their habitat, the human encroachment on forest land has also left them in a lurch," he explains.