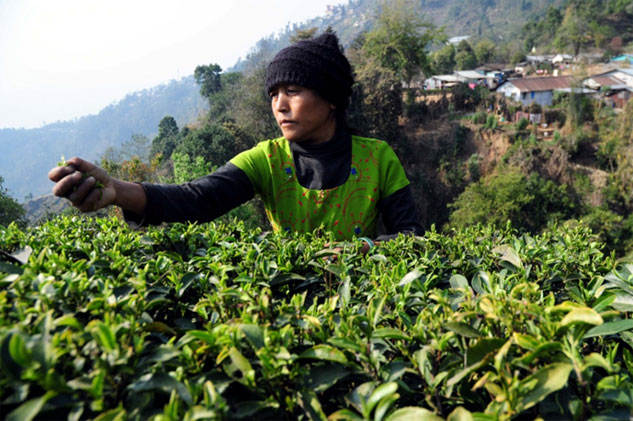 A comparison of rainfall data from the tea growing areas of West Bengal and Assam has shown a 25 to 49 per cent drop in rainfall between January and March 2014, compared to last year. Very low precipitation in April might dent production of the finest first and second flush teas, the Indian Tea Association (ITA) has said, adding that a lower production and increased costs might also effect the impending wage revision due for West Bengal tea estates.

Indian Tea Association is the apex planters’ body with 425 member gardens in West Bengal and Assam. These two states account for nearly 75 per cent tea produced in India.

When the April rains fail

Rainfall in April is crucial for the high quality first flush tea production in Darjeeling. In Assam and Dooars region of northern West Bengal, the second flush beginning mid-May produce the best quality teas. “Production figures for the month of April are yet to arrive but we might see 10 to 15 per cent dip in production,” said Monojit Dasgupta, secretary general of the ITA.

ITA’s analysis of rainfall data shows that while Darjeeling saw 37 per cent lower rainfall during January to March this year (compared to last year) in Upper Assam districts, the decline is as high as 49 per cent (see table: Rainfall deficit).

The situation has further deteriorated during April this year in North Bank of Assam valley (in Nagaon, North Lakhimpur, Bishnauth, Tezpur, Borsola, Mangaldai districts), according to rainfall data from the Tea Research Association’s meteorological station at Thakurbari. Total rainfall from January till April 20, this year, has been 71 mm against the water requirement of 310 mm, the ITA release noted, adding, this is leading to scorching of tea leaves and defoliation, raising the spectre of pest attacks.

“Pest attacks show up when leaves degrade in quality due to low rainfall and higher temperatures,” said Dasgupta, adding, “the twin effect of weather and pest attack will raise cost of irrigation and pest management.” Normally temperature hovers around 35°C in April, but it has already touched 40°C in many areas of Assam and West Bengal, he said.

However, labour unions and activists say that the industry should not use short term rainfall data to suppress wages. At present tea estates of West Bengal pay Rs 95 as daily cash wages, compared to Rs 151 under the central government’s employment guarantee scheme, MGNREGS, or Rs 225 paid to tea workers in Kerala.

“Without any production figures, industry associations should desist from using rainfall data as a bargaining chip during wage negotiations,” said Vaskar Nandy, president of Paschim Banga Cha Bagan Sramik Karmachari Union, an independent labour union. “Long term rainfall and production data is required before a conclusion is drawn,” he added.