Will CITES become an endangered convention? Can it redefine its relevance? 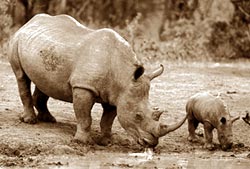 In a fortnight's time, the poster boys of conservation -- African elephants -- will yet again be in the thick of controversy when the 13th Conference of Parties (cop-13) of the Convention of Trade in Endangered Species (cites) takes place at Bangkok, Thailand, from October 2-14, 2004. Of all the battles that would engage the delegates from 140 countries, the media is bound to focus the most on the issue of the one-time sale of ivory stockpiles by four African countries. India will obstinately stick to its old stand against the sale.

In this din, the convention shall also try to step away from the shadow of the spectacular species to a more rational approach towards sustainable trading in all wild species. But before getting there, it will have to take decisions on controversial new proposals for down-listing (opening up to controlled trade) and up-listing (restricting trade) of certain charismatic species. Every conservationist is bound to be agitated by the proposal of lifting the ban on hunting the endangered black rhinoceros by South Africa and Namibia. Currently, the animal is listed in Appendix 1 of the convention, which completely bans international trade. But the two countries believe they have done well by resuscitating the population of the species from an estimated 3,600 black rhinoceros -- the majority of which managed to live through rampant poaching in the 1980s and early 1990s. (The population had plunged to this figure from more than 60,000 in the 1970s.) Namibia seeks a hunting quota of five rhinoceros annually out of its estimated population of 1,134, while South Africa wants to hunt 10 rhinoceros every year from its estimated 1,200. cites already allows limited hunting of white rhinoceros in South Africa.

For India the most embarrassing moment could arise out of its Janus-faced approach towards conserving chiru or the Tibetan antelope, a small population of which resides in the trans-Himalayan region bordering Tibet. Even some ardent supporters of sustainable trade in wild animals or their derivatives are up in arms against India for not evolving a concrete plan to check the dwindling population of this high-altitude animal whose under-wool forms the raw material for the highly-valued Shahtoosh shawl in Kashmir. While India is one of the most extreme parties, constantly pushing for listing of species as endangered in the cites appendices, in the case of the chiru its constant excuse is that the matter is sub judice. Now, the standing commission of cites, through a proposed document, has threatened to impose sanctions if India does not come up with a plan.
The toughest battle that cites should be gearing up for at cop-13 would be for its own relevance -- to keep pace with the changes being made by forums like the Convention on Biological Diversity (cbd) in the world trade in natural and nature-based products. cop-13 will have the chance to adopt a document in this regard, prepared by Ireland and Kenya after deliberations that began even before the cop-12 in Chile. cites already has a memorandum of understanding with cbd and fine-tuning it may allow it to focus on its main purpose and limit its role in other matters, such as invasive species.

Another crucial issue would be the adoption of the document to formulate principles and practices of sustainable use. These have already been discussed earlier this year at a workshop in Germany, but remain controversial for guiding the convention down tracks it has shied away from. But trade-friendly non-governmental organisations like iwmc World Conservation Trust are pushing for its approval.

As in the previous cop, the true test for cites in Thailand, the centre of a major global trading zone of wildlife species, shall remain in looking beyond a few popular species and finding its space in the international trade arena. For this, it will need to negotiate with other bodies like the International Whaling Commission, the un Food and Agricultural Organisation and the Commission for the Conservation of Antarctic Marine Living Resources. This might help it become an effective tool of management and not stagnate as a tool for inter-country trade rivalries.