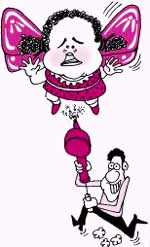 the us Environmental Protection Agency (epa) recently halted a controversial study, initiated in October 2004, on the adverse health affects of pesticide exposure on children (babies to three-year-olds). Health experts opposed the study on the ground that it purposely exposed children, especially those belonging to low-income families, to toxic chemicals. But epa's latest move is believed to be triggered by political pressure and not health concerns.

Soon after its launch, the two year-study was suspended in November 2004 following opposition by health experts. It was to be resumed shortly but epa acting administrator Stephen Johnson announced on April 8, 2005 that it had been put on hold pending independent review. The move followed senator Barbara Boxer of California and senator Bill Nelson of Florida threatening to hold up the confirmation of Johnson's designation as epa' s head in the senate unless he cancelled the study. Johnson has been epa 's acting administrator since January 2005.

"If epa can get away with testing babies, infants, then they can get away with anything when it comes to human testing of toxics," warned Boxer. She said Johnson had earlier refused the possibility of cancelling the study. But he seems to have bowed to the pressure now, though not entirely committing to cancel the study.

Critics also questioned the motive of the research. epa had received us $2.1 million from the American Chemistry Council (acc), a chemical industry front group, for the study. The group would obviously have wanted favourable results. "...There will be little to no obvious short term negative effects on these children at the end of two years. The seemingly positive results will allow acc to announce positive ' epa study results' to the people [and] lobby Congress to weaken regulations on these products," warned the us Organic Consumers Association, a non-profit group.