What does it take for a lay athlete to take on a Serge! Bubka or a Carl Lewis? Good,powerful lungs, say scientists 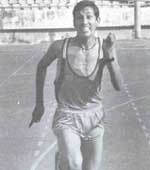 LUNGS could be a major deciding factor in the development of a sportsperson, says a recent research brought to light by New Scientist, Vol 147, No 1996. The study concluded that it would also be possible to predict whether aspiring atheletes would reach the top.

Earlier, for studying the sporting potential of a person, doctors concentrated on his heart and muscles. But Brian Whipp, professor of physiology at S1 George's Hospital Medical School in London, says that people with excellent muscular development and heart condition may be limited by their lungs.

How much exercise a person can cope up with depends on the rate at which oxygen is supplied to the muscles in his body and how quickly carbondioxide is driven out of the bloodstream. This has been thought to be a problem for people suffering from a lung disease only. "We've been taught that the lung can handle anything the heart can throw at it," says Whipp.

The above statement holds true for people who hardly under. strenuous excercise, as th not exploit the total lung cl city even when they work hard. Thus, they h called the "breathing reserve.

During a sports evenal metabolic rate in an ath may become very high, un ing the consistent flow of through his lungs. Therefore such cases, the lungs tend to as "the limiting factor for ml mum exercise.

Apart from the airflowl capillary area in the lungs a determines the sporting tial of a person. If the netwi area of the capillaries is sull then the blood purification proce hampered. Either it may pass thro without being fully oxygenated, or the carbonclioxide may not be toti removed. This again proves to be obstacle. To achieve total purification. blood must pass through the lungs slowly, but the high metabolic rate increases the demand for blood in the rest of the body.

However, to rely totally on lung tests to decide the athelete's potential may be misleading. Some people may have big lungs, but the air-exchange chambers or the capillary network area may be small.

Wbipp is hoping that in another few years they will be able to work out some tests which would enable them to screen budding atheletes for strong lungs. The results would help them identify those who might be unable to reach the top in their career. It might also caution them from straining themselves beyond a certain limit. It is well known that lungs of racehorses often bleed after a tough race; whether or not human lungs could meet a similar fate is not known. Only research can answer this question.