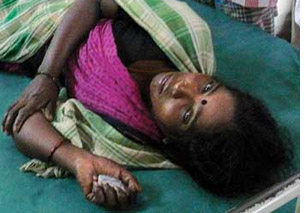 A Kannan has been feeling dizzy with fever for days, his limbs are shaky. He has come to the government hospital in Tamil Nadu's coastal Cuddalore town with others from nearby Kudikadu village with similar complaints. A common scene in a hospital. But the shock comes when one begins counting. Seventy people from the village of just 750 were admitted to the hospital on that day, October 15. "We have been in and out of the hospital for a week now," says Kannan, 34. Vishwanathan, an industrial worker, got his wife admitted to the hospital five days ago with similar symptoms. She has also been coughing up blood, he says.

Residents of Kudikadu, located within the State Industries Promotion Corporation of Tamil Nadu (sipcot) industrial complex on Cuddalore's outskirts, have been constantly complaining of headache, dizziness, rashes and chest pains. In the village, one can see a thin layer of soot over everything. On days when the wind is blowing towards Kudikadu from the direction of the industrial units, the stench, like that of rotten cabbage, is unbearable. "We have been living like this for a long time, but in the past few months the stench has become worse," says Kannan.

But the doctor on call at the hospital could not see any connection between the admitted cases and the living condition in Kudikadu. "Since this is the season of viral fever, it is not unusual that so many people are here," she said.

There is nothing unusual about industrial pollution in Cuddalore either. The sipcot complex, with 31 industries, has been polluting its environs for over 20 years (see 'Over the edge', Down To Earth, November 15, 2005). Most are highly polluting industries manufacturing pesticides, paints, dyes and pharmaceuticals. They use benzene, a carcinogen, trichloroethylene, a suspected carcinogen, chloroform and methylene chloride, which causes skin irritation and respiratory problems. A community-driven group, sipcot Area Community Environment Monitors (sacem) has detected eight carcinogenic compounds in the air and 16 other harmful compounds up to 20,000 times the limits prescribed by the environment protection agency of the us. Since India does not have air pollution standards for industries, sacem follows American standards.

Desikan, a doctor practising in Cuddalore, says, "There are chances that villagers' respiratory problems arise from industries' emissions. However, no scientific studies have been done to understand the link." Residents of villages in the industrial complex, however, have no doubt about the source of their health troubles. S Bhagyalaksmi of Kudikadu says the doctors she had consulted in the past dismissed her health problems as part and parcel of living in sipcot. K Thilakavathi of Eachangadu, another village within sipcot, agrees. Thilakavathi is one of the many women trained by sacem to collect information on health. Since the villagers have started monitoring the air, the industries have been wary. "Usually these chemicals are emitted at night when most people are asleep. We notice it on the nights we come home late," says Kannan.

Is the government doing anything about it? It turns out Tamil Nadu instead plans to expand sipcot. Coming up are the Cuddalore Power Corporation Limited's (cpcl's) power plant, Chemplast Sanmar's pvc plant, a ship-building yard and a textile park with 200-300 units, says Nityanand Jayaram associated with Other Media, a platform for public-interest issues advising sacem on environmental monitoring. cpcl is in the process of buying land (see box: Private public hearing). District engineer Ramasubbu is tight-lipped about factories violating the law and action taken against them. All he would say is that the board is following the rules. Nothing unusual about the administration's apathy. You can smell it in the air.