Macaroni in the brain 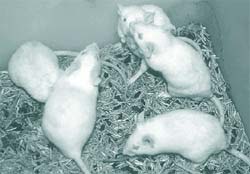 the disease first goes unnoticed, affecting people in the autumn of their lives. Initially, people forget where the keys were left, forget a name or two and, eventually, they lose their direction -- literally. Ultimately, it destroys that which makes us humans so special: our memory, our cognition, our skilled movements, and our language -- until it has robbed us of our personality altogether. Drugs can control this gradual degeneration of the brain, but to date there is no cure for Alzheimer's disease.

These changes occur due to progressive dysfunction and death of nerve cells, which are responsible for the processing and storage of information in the brain. Over the past decade, considerable headway has been made in our understanding of Alzheimer's disease. At least four genes have been found to have firm links with the development of the disease.

By introducing a gene into the genetic make-up of a mouse -- or by removing it, for that matter -- and by studying the effects this has on the physique, researchers try to unravel the functions of the various protein products encoded in these genes. Occasionally, such genetically engineered mice develop disease symptoms akin to the disease in humans, which helps to identify therapeutic targets and to test novel treatments.

One such culprit gene encodes the so-called amyloid precursor protein ( app ), which is manufactured by our nerve cells. Although app 's normal function is not known, mutations in app are associated with certain forms of Alzheimer's disease. How mutant app causes the death of nerve cells is a mystery, but fragments of this protein -- the amyloid peptides -- are the main constituents of the senile plaques found in Alzheimer's patients. Moreover, mutations within the app gene result in overproduction of these fragments.

Dale Schenk and his colleagues from Elan Pharmaceuticals of South San Francisco in California, report that they have succeeded -- in a breathtakingly simple way -- to purge mice with Alzheimer's-like ailment of senile plaques. Schenk's team created genetically modified mice that carried a mutant human app and they observed that their animals developed senile plaques as they grew older, just like Alzheimer's patients do ( Nature , Vol 400, No 6740).

The researchers injected young mutant app -bearing mice with human amyloid in the hope that these app snippets would switch on the immune defenses of the mice, which is indeed what happened.

So, while the researchers sat back, relaxed and waited for the mice to grow older, the mice were busy manufacturing antibodies against amyloid. The mice that produced large amounts of antibodies hardly developed the disease symptoms. Thus, vaccination resulted in the near-complete prevention of amyloid accumulation.

The researchers carried out similar tests with older mice that already had heads full of senile plaques. To everyone's surprise, this treatment not only hindered plaque formation but also led to the disappearance of pre-existing plaques. At present, it is not known how the antibodies drive the plaques away. But the question is: do we have a vaccine against Alzheimer's disease?

Scientists are cautious. First of all, it is not at all certain that a human immune system will respond to a human protein in the same vigorous way as a mouse's immune system does. But, more tangibly, the existing mouse models for Alzheimer's disease only partially mimic the human disease. Whereas it is true that the amyloid protein accumulates in the brains of the mice, these mice neither display the same loss of nerve cells nor the behavioural abnormalities associated with the disease in humans. Moreover, whether the deposits outside the nerve cells are causing neuronal dysfunction and death or are merely by-products of the disease is controversial.

Amyloid is toxic to nerve cells and its correlation with severity of the disease and the plaque load is being debated. There is evidence that amyloid and full-length mutant app can be detrimental to nerve cells long before senile plaques have been formed or even without their formation at all.

Thus, it may be necessary to completely halt the production of amyloid fragments for it to be of therapeutic value. Or, to phrase the question differently, if plaque formation is prevented or reversed, do patients still behave like their heads were full of macaroni and continue to put books in the oven, keys in the car and repeatedly lose their way?

While this research may not give all the answers, it does provide a direction in which to concentrate their efforts.