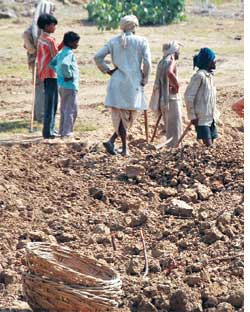 Enquiry ordered; Rs 2.5 lakh spent on UP road project to be recovered

following complaints of irregularities, Mahoba's district magistrate has stalled the release of funds for a road project under the National Rural Employment Guarantee Scheme. The work should have been done manually, but it turned out machines were being used.

An activist blew the whistle on officials in the area not employing villagers to construct the three-km road between Ragauli and Barera Khurd in Jaitpur block at a cost of Rs 20 lakh.

The district magistrate has ordered an enquiry and promised action. The complainant, Om Prakash Bharati, said the sub-division and block level officers refused to heed his complaint. They defended the contractors by saying the machine was used only to remove stones that could not be removed manually.Bharati then approached the district magistrate along with a video recording of the road construction site. Some of the labourers working at the site said they had been called from other villages. "We were asked to flatten a trench to make it appear like the work was done manually," said Yogender, pointing to the rocks scattered around.

The Rs 2.5 lakh released for the project will be recovered, district officials said.