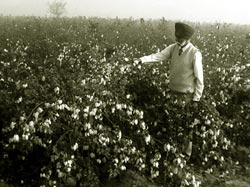 a recent development may help farmers in India overcome the problem of pests attacking genetically modified (gm) cotton. Many farmers have started using insect-resistant gm bt cotton licensed by the us biotech giant Monsanto. The gm cotton carries the cry1ac gene of the bacterium Bacillus thuringiensis, which enables it to secrete a protein that is toxic to the pests. Now researchers from the Tamil Nadu Agricultural University in Coimbatore have cloned the cry2aa and cry2ab genes from indigenous isolates of a bacterium.

The work has been done by V Udayasuriyan, Shantanu Kumar, P Sangeetha and M Bharathi. The researchers isolated the cry2aa and cry2ab proteins from recombinant strains of the bacterium Escherichia coli that harbour cry2aa and cry2ab genes, and tested them for toxicity against a common pest, the cotton bollworm (Helicoverpa armigera) . The team found that cry2aa protein caused 100 per cent mortality of the bollworms at a concentration of 650 nanogrammes per millilitre after 48 hours. Cry2ab was not toxic to the insects (News India, June 2004).

The findings could help develop bt cotton strains using indigenous technology. But more importantly, it will help farmers in controlling the development of resistance in insects exposed to the cry1ac protein of Monsanto's cotton. bt cotton cultivars from Monsanto that express the cry1ac protein has been grown in India since 2002. "Continuous exposure of pests to a single kind of bt toxin can lead to the rapid development of resistance in insects," warns Udayasuriyan. One way to prevent this is by 'pyramiding' two genes in the cotton plant, instead of just one, to express proteins with different modes of action. The pyramiding ensures that the crop is protected by the second gene when the pests develop resistance against the first.

Cry2a is a different class of proteins from cry1a, and experiments have shown that bollworms that are resistant to cry1ac are not cross-resistant to cry2a proteins, Udayasuriyan says. This is because the two proteins have differences in their structure and insecticidal mechanisms. "The cry2a proteins are therefore promising candidates for managing the development of cry1ac resistance in insects," he explains.

Researchers have already developed a second version of bt cotton that contains cry1ac and cry2ab genes. Such varieties have been commercialised in the us and are now being tested in India and other nations.

But before these transgenic plants are commercialised, it is a must to evaluate the efficacy of transgenic plants expressing the two proteins, as experiments show that cry2ab might not work in Indian conditions, says Udayasuriyan.

The researchers believe that extending the us technology to India may not be viable because the main pest for us cotton is the American bollworm, whereas in our country it is the old world bollworm.

Variations in a few key amino acid residues in the cry proteins can significantly affect the way different pests react to their toxicity. Therefore, Udayasuriyan and his colleagues have made a collection of indigenous bt strains, cloned cry genes from new isolates, and are investigating the toxicity of their proteins against major pests of rice, cotton, cabbage and other important Indian crops.

"We found that the protein encoded by an indigenous cry2a gene is superior to cry2ab against H armigera, and its amino acid sequence is also distinct from it," says Udayasuriyan. "Identification of more potent bt proteins for the target pests will provide a basic material to develop better versions of bt crops and to sustain the useful technology in India." The scientists believe their observation that the cry2ab protein from the Indian bt isolate is not toxic to bollworm does not mean that this protein is ineffective. "Another expression system could yield toxic cry2ab protein in E Coli. But it is a must to conduct trials before making any claims," concludes Udayasuriyan.