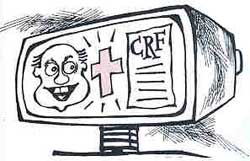 INSPITE of recent advances in forensic, science, such as the development Of DNA profiling technique, the conventional fingerprint tests continue to remain an important aid to identify an individual suspect at the scene of crime. Now researchers from the University of Wales, in Swansea, UK, have developed a new technique for detecting fingerprints and footwear impressions found at the scene of crime, which they claim offers many advantages over the conventional methods.

The novel technology employs finely powdered magnetic flakes, developed at the university's department of material engineering, that can produce clear and identifiable impressions under conditions which would defeat existing finger print powders, they claim.

Traditionally, fingerprints are developed using fine flake powders applied with a glass-fibre or animal-hair brush to areas where crime fighters suspect that fingerprints could be found such as door handles and window frames. The flake powders tend to stick to the ridges of a print, so that, gentle brushing of the residue tends to clear the flakes from the areas in between the ridges. The end result is that the powder clings to the surface in a manner which reproduces the pattern of the original print, which can be clearly seen and photographed.

Crime fighters have all along employed highly reflective aluminium-based powders to reveal prints on dark backgrounds, and darker powders for use against lighter backgrounds. "Unfortunately, this method has one real drawback," argues B Wilshire, professor in the department of materials engineering at the University of Wales. Conventional detection methods may damage prints because sweat contours defining fingerprint ridge pattern can be smeared by bristles of even soft brushes. "This means that up to 10 per cent of fingerprints found at the scene of a crime- could be difficult or impossible to identify for this reason alone. Further, there are also associated long-term respirable health risks for forensic experts who are constantly exposed to dust clouds generated during standard powder dusting operations at scenes of crime," he explains.

Though these drawbacks can be reduced substantially by the use of alternative mixtures called magna powders - they consist of mixture of spherical iron particles with fine flakes of non- magnetic aluminium - but the fine magnetic flake powders developed at the University of Wales are even more effective, claims Wilshire.

"Since these are made up entirely of magnetic flakes, not only do they reduce the danger of prints being smeared or smudged, but also produce extremely fine prints over a wide variety of surfaces," he says. "Further, the magnetic flake methodology also eliminates any risk to the health of investigating officers."

The magnetic powders can be supplied in light or dark flakes to provide a contrast with any type of background.