Maha Kumbh to be a dry run? 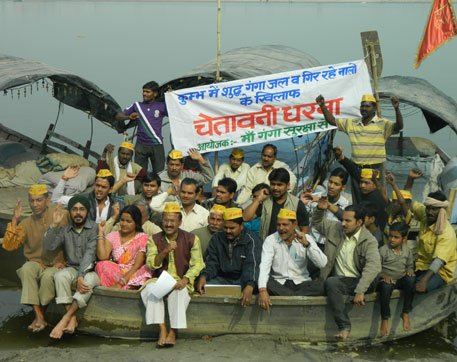 The Maha Kumbh starts in Allahabad in less than a week. The first shahi snan (bathing) is to be held on Makar Sankranti  festival on January 14. But low water levels in the Ganga might play a spoil-sport for the mass-bathing festival. While government officials claim enough water is being released into the Ganga in Allahabad, religious organisations are not happy. Tirth Maryada Raksha Samiti, a conglomerate of several organisations, has demanded additional water be released to ensure pilgrims have enough clean water to take the holy dip. They have also sought the setting up of a monitoring cell to ensure the river flow is maintained during the biggest religious gathering of Hindus in the world.

Jawed Usmani , chief secretary of Uttar Pradesh government, had directed the officials to ensure 2,500 cubic feet per second or cusecs of water is released into the river between January 1 and February 28 this year. Subsequently, 1,500 cusecs of water is to be released from the Narora barrage until March 15. The principal secretary of irrigation department claims 2,516 cusecs water has already been released from the Narora barrage since December 20. Depending on the need, nearly 9,000 cusecs more would be released from the Tehri dam in the coming days, he says.

Sanjay Chopra of Tirth Maryada Raksha Samiti, however, cries foul. He says the water level in Ganga is too low for the shahi snan. “If the government is releasing additional water, where is it going? The water in the river is hardly enough to take a dip. If this condition persists, millions of pilgrims coming to Allahabad from across the world would be cheated,” says Chopra.

Chopra says the government should set up a monitoring cell to keep a check on the water level in the river and ensure the amount of additional water promised by the state government is released. If the government fails to do this, protests would be organised at the mela venue on a large scale, he warns. J N Yadav, the district information officer, assures additional water is being released into the river and if pilgrims need more, the administration would ensure that their demands are met.

The officials claim several steps have been taken to ensure the river stays clean for the holy dip. Jawed Usmani has issued directives to close polluting industrial units in Bijnor, Bareilly and Meerut and the state government has ordered the closure of 80 tanneries in Kanpur in the wake of the Maha Kumbh.

Recently, upon the directions of Usmani, a regional officer of Kanpur's pollution control unit was suspended from duty upon failing to check the release of polluted effluents from 33 tanneries into the Ganga. The Uttar Pradesh Pollution Control Board has also recommended closure of eight distilleries, 14 paper manufacturing units and 148 tanneries to keep pollution levels down in the Ganga during the festival period. Usmani says district magistrates are to ensure the units remain closed till further orders.