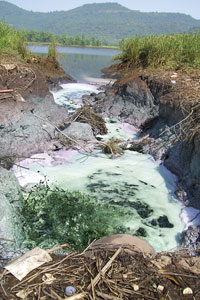 DESPITE closure notices several industrial units are operating in Mahad tehsil of Raigad district, polluting a river and wells. As a result fishing and farming in the region have been badly affected.

On November 30, Mahad subregional office of the Maharashtra Pollution Control Board (MPCB) issued notices to six industrial units in the Maharashtra Industrial Development Corporation (MIDC) to close within 72 hours. It asked 12 other units to close within seven days. The action came after residents of village Shirgaon in the region protested when effluent-laden water entered their houses.

The residents allege the action taken by the authorities is mere hogwash as similar notices issued earlier to several industries had no results. After the November 30 closure notices, the companies were given two-three days extensions to wind up their operations. On December 10, after notice periods expired, the MPCB claimed that 16 of the 18 errant units had been closed.

But when Down To Earth visited the area five days later nearly all units were found operating. Inquiries revealed that MPCB itself had ordered the water department to resume supply to all the closed units except two. MPCB subregional officer J S Salunkhe did not respond when contacted. M R Thakur, field officer of MPCB said he had no clue on how many units have closed.

While the authorities dilly-dally, effluent- laden water has destroyed two most important sources of living in Mahad— farming and fishing. The MIDC became operational in 1981-82. Till 2003, the 103 industrial units were releasing untreated water despite effluent treatment plants in some of the larger units.

Before the industries came in the area was “like heaven”, rued Nizamuddin Jalal, a resident of Tol village of the tehsil and member of the non-profit, Citizens for Justice and Peace, as he looked down at the murky, oil-coated waters of the river. Known as the Bankot creek in its lower reaches, the Savitri was full of fish. Even the poorest had no worries if they could grow rice; fish and vegetables were available all year round, he added. He noted things changed thereafter and some 5,000 families of fishers have lost their means of living.

In 2007 the Mahad MIDC was in the list of the world’s thirty most polluted industrial areas, compiled by Blacksmith Institute in New York. “We fish a little during the monsoons when freshwater dilutes the pollution,” said Vithoba Nivate, resident of Dasgaon. Crop cultivation has also become impossible, since even the wells have been polluted. Rainfed paddy crop is the only source of farming, but it also gets destroyed as the river water enters farms during high-tide.

The pollution has contaminated water sources. Villages along a 15-km stretch from Gomendi to Sav on the bank of the Savitri are forced to buy water at Rs 2.50 per 1,000 litres from MIDC. Diseases like skin rashes, nausea, stomach ailments and cancer are rampant. “In the past five years, we have heard about 100 cancer deaths in the area,” said Sajid Qadri of Kumble village in Mahad.

Even after the setting up of a central effluent treatment plant (CETP) in 2003, residents allege the water is not treated. “Water released is either solid black or a vivid, acidic green with streaks of red, and the stench is overpowering. How can treated water smell like that?” asked Anantram Bhave, a resident of Ovale village. 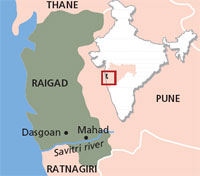 CETP was set up to filter the already treated water in individual industries and bring down the Chemical and Biological Oxygen Demand (COD and BOD) to acceptable levels. Govind Borole, CETP plant manger, alleged that industrial units send untreated water.