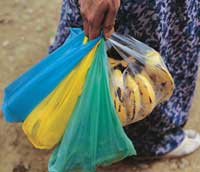 maharashtra's Non-biodegradable Garbage (Control) Ordinance, 2006 has come into force with immediate effect, following the governor's approval on February 27. The ordinance, controls ways in which non-biodegradable materials are to be disposed. It also bans the manufacture, transport and use of polythene bags. Maharashtra is the third state to pass such an act.

The state has set 50 microns as the least permissible thickness for polythene bags (Goa and Himachal Pradesh have specified a thickness limit of 40 microns and 70 microns, respectively). However, polythene bags used for food items, medicines, milk and oil packets are omitted from the ambit of this ban, with a specification that such bags are to be manufactured using virgin plastic raw material in its original The ordinance makes it mandatory for polythene bags to mention the details of the manufacturers, including the registration numbers issued by the Maharashtra Pollution Control Board (mpcb). It also enjoins manufacturers to provide information on the size and quality (virgin or recycled) of polythene. Moreover, no unit is allowed to manufacture polythene bags in the state without the consent of the directorate of industries and commerce and mpcb. A new waste management system, as mandated in the ordinance, also became effective from March 1, 2006.

Under the system, the Municipal Corporation of Greater Mumbai (mcgm) ensures that all housing societies, commercial complexes and hotels maintain separate bins for biodegradable and non-biodegradable waste and ward-level centres are set up to facilitate segregation. Violator will be fined anything between Rs 5,000 to Rs 25,000.

But mcgm has no system in place for this mandatory waste segregation. If the ordinance has to work, a system has to be put in place.