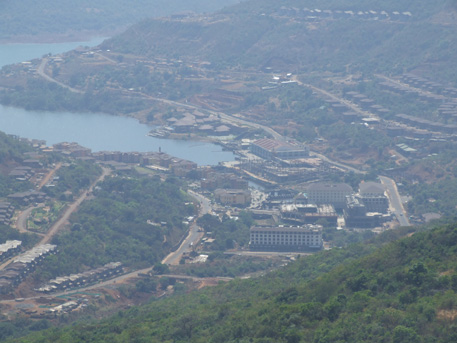 The first planned hill city of independent India, Lavasa, near Pune in Maharashtra, is in more trouble after the state government filed a criminal case against the project developer in a sessions court in Pune. The proposed hill city is promoted by Lavasa Corporation Limited (LCL).

The filing of the case follows close on the heels of the directives passed by the Bombay High Court  and the Union Ministry of Environment and Forest (MoEF), asking the Maharashtra government to take credible action against LCL for various violations. The complaint has been filed by the Maharashtra Pollution Control Board (MPCB) under sections 15 and 16 the Environment (Protection) Act of 1986. Section 15 prescribes a punishment of five to seven years for any person or body convicted of violating any of the provisions of the Act; Section 16 relates to offences committed by companies.

“We have followed the directives of the Bombay High Court. Further action will be taken as per the provisions of the Environment (Protection) Act and the directives by the Pune court. The decision has been taken after consulting the law and judiciary department,” said environment minister of Maharashtra, Sanjay Deotale.

MPCB has charged six board directors and nine senior officials of LCL. The directors accused include chairman and managing director of LCL, Ajit Gulabchand, Shalaka Gulabchand, Aniruddha Deshpande, Vitthal Maniar and Gautam Thapar. The charges will be framed against the accused after scrutiny of the case on November 5.

What about officials who colluded?

Vishwambhar Chaudhari of National Alliance of People’s Movement, one of the petitioners in the case being heard by the high court, said the government should now take the case to its logical conclusion and punish the guilty in accordance with law. “We are going to plead in the high court that environmental clearance for the project should not be given before trial is completed in the sessions court.” The case is scheduled to be heard on November 16. Chaudhari says the officials concerned in various government departments such as environment and town and planning should also be prosecuted for the gross irregularities in the project. “If MPCB seeks action against LCL for violations, then how can the government officials involved in approval process at various stages be spared?” he asks.

MPCB has not sought action against any government officials, as desired by some of the petitioners in the case. A report about the proceedings will be submitted to the MoEF soon.

The officials at Lavasa Corporation refused to comment on the issue. The Corporation has been consistently denying there were any violations and claim that all the permissions to develop the hill city, spread over 7,284 hectares, were issued by the government of Maharashtra. The company had earlier argued that the government of Maharashtra had granted environmental clearances to the development carried out till date.

Earlier in August this year, LCL had agreed to accept the pre-conditions imposed by MoEF for clearance to the project. The MoEF had written a letter to LCL on June 10 pointing out various irregularities and violations of environmental laws at Lavasa. The ministry had imposed five pre-conditions for clearance to the project. However, the company had strongly opposed the conditions and had challenged the letter. “The ministry was not clear whether the project will get clearance if the pre-conditions were accepted. We had requested the high court to instruct the ministry to grant us hearing before taking final decision in the matter,” a company official had said.
The company had even challenged the letter, questioning whether it was an order or just an ordinary office memorandum.

• Howl of the hills