The Maharashtra State Pollution Control Board (SPCB) has found that common effluent treatment plants (CETPs) operating in the state are ineffective. The latest weekly monitoring report of the board says that CETPs in the state are not meeting required standards. The weekly monitoring system of CETPs was put in place after an order of Bombay High Court in November last year.

The report has revealed that the treated effluent of only seven CETPs meet norms. The CETP at Butibori MIDC, ACMA, Chikholi-Morivali, Ambarnath and Thane-Belapur, all in Thane district, Kurkumbh in Pune and Waluj in Aurangabad meet the norms while the remaining sixteen do not. Ichalkaranji Textile Development Cluster in Kolhapur and Green field CETP plant in Solapur are the worst when it comes to complying with the standards, says the weekly report. (See graph) 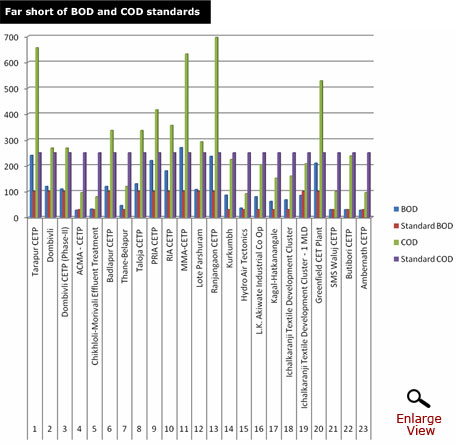 The Bombay High Court directions followed a petition filed two years ago by the residents of the state, alleging that CETP plants are not meeting standards. The petition sought a ban on all new industries in these industrial clusters till the CETPs start functioning properly. The high court had passed many interim orders for regulating CETPs in the state. The court during its initial hearings noted that the regional officers have taken strict actions like plant closure on non compliance. But these orders got diluted by the senior officials when they interfered and levied fines as a solution when the companies filed appeals.

In December 2011, the court said senior officials should pass strict orders instead of levying fines. The court also made CETP operators more accountable. They were ordered to take the responsibility of filing reports on polluting industries to SPCB (see ‘Timeline of CETP case’).

At present, the SPCB regional offices are monitoring twenty three CETPs in the state and putting data out in the public domain.

The website discloses the status on quality of treated effluents over a period and also provides information like the capital investment, amount of effluent treated and period of establishment of the plant. At present, the state has 26 CETPs, of which only 23 are operating. The total effluent treatment capacity of these plants is 208.05 mld (million litres per day). The total capital investment on these plants is a little over Rs 170 crore. More than 8,015 member industries in industrial areas of the state send their effluent to these plants.

Based on the report, an SPCB-appointed committee recommends further action on defaulters. Committees have been set up as per court orders in five industrial estates of the state.

A pollution control board officer who does not want to be named says, “We issue directions for effective operation of CETPs. They are bound to follow orders because the case is still being monitored by court. They have also submitted bank guarantees. In our office itself we have collected nearly Rs 20 lakh. So it is unlikely that they would violate standards.”
Web edition Web edition News News News Weekly monitoring … SPCB polluting industries Maharashtra State … Down to earth Common effluent … CETPs Bombay High Court BOD and COD standard …
Donate Now