Too high a premium for too little cover 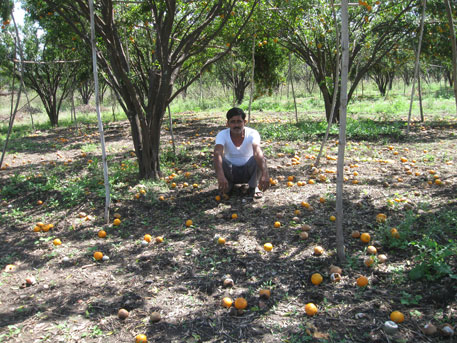 Maharashtra government appears to have learnt no lesson at all from the hailstorms that lashed the entire state in March this year, and yet again lashed several districts in May, if its new decision to include three orchard crops – orange, sweet lime and guava – in its Weather Based Crop Insurance Scheme (WBCIS) on an experimental basis during the current crop season is any standard to go by. The scheme, which has been extended over 17 districts in the state where these three fruits are predominantly grown, and which has also been made mandatory for farmers having crop loans, will benefit only insurance companies, not farmers, say orchard growers in the state.

The government resolution (GR) of June 6, 2014, says that insurance will be granted for a specific time period, against specific weather-related risks. In the case of orange and sweet-lime, protection against too little rain will be provided from June 15 to July 15, 2014, and protection against break in rainfall will be provided from July 15 to August 15.  The guava crop will be provided protection only against too little rain from June 15 to July 15.
State and Central governments will pay 50 per cent of the insurance premium, while the remaining 50 per cent will have to be borne by the farmer, says the GR. Farmers will be required to pay a premium of Rs 3,600 per hectare for orange and sweet lime, and Rs 1,800 per ha for guava, against assured compensation of Rs 60,000 and Rs 30,000 per ha respectively.

Two private companies have been entrusted with insurance work, with IFFCO TOKIO General Insurance Company being allotted the Yavatmal and Pune districts, while HDFC Agro will be working in the remaining 15 districts, says the GR. Insurance cover will be mandatory for farmers who have opted for crop loans and voluntary for farmers who have not opted for loans. Banks have been given the responsibility of including all farmers whose crop loans have been approved by June 15, this into the scheme.

Farmers point out that the terms of the insurance cover provided under the scheme does not really protect against crop loss. Manoj Jaunjal, secretary of the Maharashtra Orange Growers Association, said that despite repeated pleas from farmers, hail and storms have not been included in the insurance cover. “The current terms provide for protection for only two months, whereas the mruga orange and sweet lime season extends till the month of March when the last of the crop is harvested. And during this entire time, storms and hail pose a grave threat as they damage mature fruit and cause immature fruit to be shed.”

He said that the financial terms of the cover – Rs 3,600 for a cover of Rs 60,000, is too high a premium for too little cover. “If there is a heavy rainstorm on August 16, which causes loss of tender fruit, the farmer will get nothing. The terms would have been fair if the cover had been extended for the entire crop period and storms and hail had been included in the risk factors,” said Jaunjal.

Insurance cos to benefit at farmers' cost

Given the heavily flawed terms of insurance, the move to make insurance cover mandatory for farmers having crop loans is also a draconian measure, said farmer groups.

“Making such a flawed insurance plan mandatory means only one thing,” says organic farmer and citrus grower Vasant Futane of village Rawala in Amravati district, “that farmers’ money will be siphoned off into the pockets of the insurance company.” He said that insurance should be made voluntary. “Farmers are the best judge of whether a scheme is beneficial to them or not.”

“Insurance is needed for just two things when it comes to citrus crops,” says zero-budget farming guru and citrus grower Ghanshyam Chopde from village Mandwa in Wardha district, “one against hail and storms, and the other against white-fly epidemic, which cause the maximum damage. If government is not giving insurance against these two hazards, then the scheme might as well be scrapped.”

Nagpur division joint commissioner of agriculture, Vijay Gawde, said that inclusion of the hail criteria might make insurance expensive. “Insurance is after all a product,” he said. “The more value you add the more expensive it becomes.”

Farmers, however, feel that if government cannot make insurance useful for farmers, it should at the very least not make it mandatory. “At present what government is doing is clearly for no aim apart from enriching private insurance companies,” said Chopde.