In the last two years since completion of dam, many houses have either been immersed or washed away, and people have been left without either a roof over their heads or proper rehabilitation 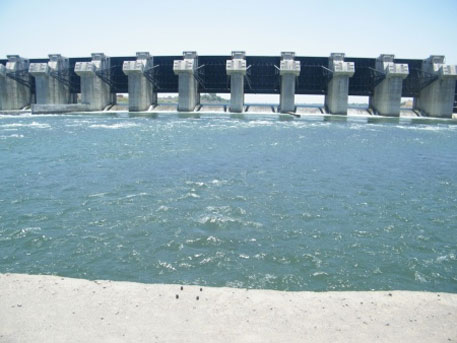 The National Green Tribunal has ordered the Madhya Pradesh government to solve the rehabilitation-related problems of the project affected people of the Maheshwar dam in consultation with the affected people. NGT was responding to a petition by Antarsingh Patel of village Sulgaon and Sanjay Nigam of village Mardana who have been displaced by the dam. NGT has ordered the state government and the representatives of the displaced to exchange proposals within the next six weeks, following which the state government will be required to organise a meeting, during which decisions will be taken regarding rehabilitation of those displaced by the project.

It may be mentioned here that while project proponents S Kumars have completed the dam construction, the company has provided rehabilitation benefits only to about 15 per cent of the dam oustees. Not only this, no displaced family has been provided land in lieu of land lost, as required by law. According to official figures, around 10,000 families are impacted by the dam, but dam oustees say actual  numbers are twice as many. Nigam said that in the last two years since the completion of the dam, lots of houses have either been immersed or washed away, and people have been left without either a roof over their heads or proper rehabilitation.

The project proponent has now admitted that it has not carried out rehabilitation work.

'Compensate as per new land law'
The petitioners have argued in an affidavit filed on July 3 that since the new Land Acquisition Act is in force from January 2014, dam oustees should be given land acquisition and rehabilitation benefits according to Section 24 of the Act. Under this Act, compensation will rise by 2-3 times what is being given now, Nigam said. Also, an extra Rs 7 lakh will have to be paid to every family.

The affidavit has argued that in violation of the rehabilitation policy, the project proponent has failed to include land owners and landless oustees from 41 out of the total 61 project affected villages, and that 90 per cent of the rehabilitation work is incomplete. It also argued that government has not carried out any estimation of the backwaters of the dam, and not just several villages, but also the towns of Badwah and Omkareshwar can be affected.

Before this, on April 2, NGT had ordered that the doors of the dam will not be closed and no water stored till the work of rehabilitation is completed. It may be mentioned here that the environmental clearance granted to the project, date May 1, 2011, as well as Supreme Court orders state that rehabilitation work should be completed at least six months before submergence.