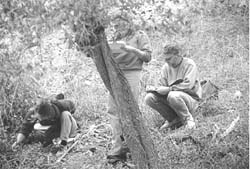 according to a new report from traffic , the wildlife trade monitoring programme of the World Wide Fund for Nature ( wwf ) and the International Union for the Conservation of Nature ( iucn ), usa is driving a highly lucrative, but unsustainable trade in big-leafed mahogany.

The us furniture industry accounts for 60 per cent of the global mahogany trade, and led to the felling of 57,000 mahogany trees in 1998. "Mahogany is often considered the Rolls Royce of trees, but if we aren't careful, it may be lost forever," says Chris Robbins, the author of the report. "All the data we analysed point to a not-too-distant future in which we could harvest big-leafed mahogany out of commercial existence." The result will be that incentives for sustainable management of high value timber species will be lost, and the land will be converted to agriculture, says the report.

Robbins suggests that consumers, importers and governments should demand mahogany products that are certified by the Forest Stewardship Council and big-leafed mahogany should be reconsidered for listing on Appendix II of the Convention on International Trade on Endangered Species ( cites ), allowing more regulation without outlawing the trade.

"Big-leafed mahogany is a valuable component of many local economies and should continue being harvested," Robbins said. "It simply needs to be done in a more methodical fashion that ensures a long-term supply and the survival of threatened and endangered species."

Mahogany has been the centre of many conflicts the worldover. In Fiji, it is believed that the recent coup which led to the ouster of prime minister Mahendra Pal Chaudhry was masterminded by parties interested in the global mahogany trade. The country has the largest known reserve of mahogany in the world. There are around 45,000 hectares (ha) of land under mahogany trees with as estimated worth anywhere between us $3.5-4 billion.

In recent interviews, Chaudhry has been stressing on the fact that the lucrative mahogany deal is the real reason for the coup. George Speight, the rebel leader, had been a key player in the battle, which involved, besides the two main parties -- the Commonwealth Development Corporation ( cdc ) of the United Kingdom and the Timber Resource Management ( trm ), an us consortium -- the us embassy, the British High Commission, Fijian landowners and some of the powerful local traders. Chaudhry alleges that Speight was a proxy for trm.