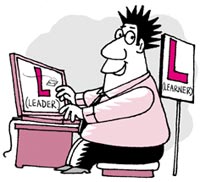 want to know how your organisation really works? Study the flow of internal e-mails, say scientists from the us-based technology firm Hewlett-Packard. The researchers have developed a way to use e-mail exchanges to build a map of the structure of an organisation. The map shows the teams in which people actually work, as opposed to those they are assigned to. The technique also reveals who is at the heart of each sub-group. Employees often correspond with designated leaders. But unofficial 'de facto' leaders can also emerge, say scientists from Hewlett-Packard.

It has long been recognised that big institutions tend to divide into informal networks, called communities of practice. For example, members of a department may consult one particularly useful person in another department, linking the group into a community of practice. Such collaborations are very common in scientific research groups. But communities of practice are difficult to identify, as the process typically involves laborious interviews and surveys. E-mail, however, leaves a robust trace of the interactions between two people.

Joshua Tyler and colleagues at Hewlett-Packard tested the theory on a set of nearly 200,000 e-mails exchanged between 485 employees of the companies during three months. The researchers found 66 communities. They asked 16 employees how well the method had identified their community of practice. Most responded along the lines of "yes, that's pretty much our project team", despite the communities crossing the formal departmental boundaries.