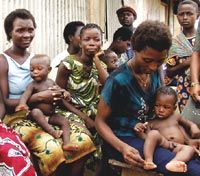 Dozens of people are believed to have died and hundreds injured due to fighting between two local communities: Ijaw and Itsekiri. The clashes are attributed to demands by the Ijaw community for better political representation and compensation from oil companies who they accuse of polluting their fishing waters. Militant Ijaw youths have declared that they would make the region volatile and demanded a bigger share of revenue from oil wells which they insist lie on their traditional lands.

The Nigerian government has sent thousands of soldiers to the region to try and contain the conflagration. Fleeing refugees report that the area is under siege by navy gunboats and troops. As a retaliatory measure, the Ijaws claim to have seized 11 oil installations.