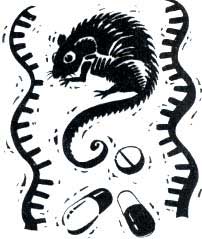 FivF. years ago, nobody had heard of 'antisense' technology. Now there are biotechnology companies based on it, and antisense drugs are in clinical trials. To understand antisense technology, consider the double helix structure of DNA that has two inter-locking strands that make up genes, Usually, only one of them makes sense - that is, only one of them holds meaningful genetic information. The other, the antisense strand is just a molecular mirror image, carrying an inverted message that the cell does not use. But it turns out that this strand is a simple and a potentially powerful tool.

Two Indian scientists in the us are today at the focal points of research to develop antisense compounds as therapies for dengue fever, yellow fever, cancer, AIDS and other diseases. They are Ramaswamy Narayanan of Floffinann-La Roche Inc in New Jersey, us, and Sudhir Agrawal, vice president Hybridon Inc, a biotech firm in Massachusetts.

The uncertainty about what anti- sense drugs are doing inside the body has caused some experts in the field to argue that clinical trials have begun far too soon. "It is too early to take these things to human beings when we don't even know how they are working in a test tube," contends Narayanan. To Agrawal it does not matter how the drug works, if they end up helping AIDS patients. "Despite all the other properties, we feet that if we find an antisense effect then we have a new drug," says Agrawal.

One reason antisense technology looked like the answer to drug designers' prayers is that it seemed to be simple and straightforward. During the first step of AF protein synthesis, in which genes are copied into RNA, only one strand of the double-helical DNA is SO transcribed. For a gene to be useful, the information it carries has to be turned into a protein. This is done in two steps. First, a molecule - known as messen- get RNA - is copied from the sense strand of the DNA.

J This molecule is then transported from the cell's nucleus - where the genes are kept - to the main body of the cell, where the cellular machinery translates the messenger RNA into protein.

Thanks to gene sequencing, making an antisense molecule is relatively simple. Once a desired gene has been identified and the order of its basis is known, the mirror image molecule can be readily synthesised. And even if antisense technology does not provide the answer to infectious diseases, it may still be good at fighting more stable targets, like cancers and genetic diseases. The specificity of antisense means that knocking out the action Of, say a turnour-promoting gene may be straightforward and bring with it few side-effects. That would still be a considerable triumph. For example in angioplasty, a treatment for expanding the narrowed coronary arteries, a tiny balloon is inserted through a slim 'catheter' tube along the interior of an artery to crack and plough through fatty blockages. But in up to half of these procedures, the blood vessel narrows within six months at the very spot where it was cleared. Often the narrowing is caused by an uncontrolled growth spurt of the smooth-muscle cells that support the artery's walls. Searching for a solution, researchers have pioneered a gene therapy that in rats has kept a cellular messenger RNA from opening the floodgates to rapid duplication of smooth muscle cells.

The therapy involves a compound that is a member of the emerging class of antisense agents that are believed to block genetic messages. in trials on rats, scientists at Massachusetts Institute of Technology and Harvard Medical School, both in the us, performed balloon angioplasty on part of the neck artery. They then coated the vessel's outer layer with liquid infused with a particular antisense agent that should hilt a gene believed to trigger replication of smooLh-muscle cells. Tests done two weeks later showed up to 90 per cent of possible smooth-muscle cell growth was prevented so that the artery remained unblocked. Equally important, smooth-musclc cells supporting the blood vessel were unharmed.

Whether these therapies are possible - as well as safe and effective- in people won't be known for at least the next few years. So far, no one has actually proven how these antisense agents work and determined how extensive their effects may be. For example an antisense agent might tamper with more cellular messages than the one targeted.