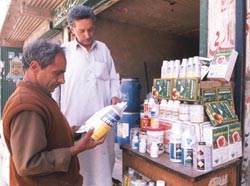 the Jammu and Kashmir government has cracked down hard on dealers of substandard pesticides, fertilisers and fungicides who have, of late, been doing roaring business in the state at the expense of gullible farmers.

In April 2003, the Directorate of Enforcement -- a cell established in 2002 to monitor pesticides and fertilisers -- collected 71 samples of pesticides, of which two were found substandard. The department booked 64 erring dealers in 2002. Official figures reveal that out of 326 pesticide samples collected in 2002, 13 were found to be of poor quality.

"If we detect a substandard sample, we inform the farmers through newspapers and electronic media," says G N Lone, deputy director, Directorate of Enforcement. Farmers are, however, not satisfied with this method. "It takes two to three months for the lab results. By the time the notices are published or aired, the farmers would have used the poor quality products. The authorities should analyse the samples before the product reaches the market," says Haji Mohammed Yousuf, president of New Kashmir Fruit Growers Association.

Experts warn about the risks involved in using such pesticides. "Instead of killing pests, such spurious products end up revitalising them," asserts Abdul Razaq Dar, an agriculture scientist who studied the effect of cobondaizium (a pesticide) on non-target vertebrates and insects.