Physicists say it's theoretically possible to make a sun in the laboratory. 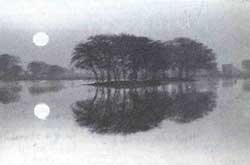 ASTRONOMERS say the sun is losing its brightness and some billions of years from now -- a short period in astronomy -- it will disappear into cosmic darkness. But life on earth may still continue as particle physicists have conceived of a sun in the lab.

Particle-hunters in the US and Europe are gearing up to capture the elusive building blocks of the standby sun -- fundamental particles called strange quarks that make up what physicists call "strange matter".

The strange quark belongs to a six-member quark family, whose other constituents are up, down, top, bottom and charm quarks. The only ones that make up matter as we know it are up and down quarks, but in theory, matter could be formed out of strange quarks as well. In nature, strange quarks are most likely to turn up in the interiors of collapsed stars, say physicists.

Investigators at particle accelerators at Brookhaven National Laboratory in New York and CERN in Geneva are busy setting up the complex apparatus they will use next summer to speed up and collide gold nuclei in an attempt to create a blob of strange matter (Science, Vol 262, No 5131).

Strange quarks were abundant during the first fraction of a second after the Big Bang but nearly went extinct as the universe cooled. Accelerators can produce two-and three-quark combinations that include strange quarks, but these decay quickly to smaller particles.

But in the 1970s, Massachusetts Institute of Technology's Arthur Kerman proposed that if strange quarks are produced in sufficient quantities, some of them might stick together. Kerman argues that this model is the most stable form of strange matter.

Brookhaven's Carl Dover has proposed a different way of holding these particles together. His idea is that strange quarks could substitute for the up and down quarks of ordinary matter. Everything would still be bound in triplets, but some would have one, two, or occasionally three strange quarks. Dover says it's theoretically possible to make a conglomerate of strange quarks as big as the sun but that would require an immense amount of matter.

Only the experiments scheduled for next summer could determine which model would hold. But there is a hitch: along with strange quarks are formed an equal number of antimatter counterparts, called anti-strange quarks. On colliding, they annihilate each other, giving out radiation. So if strange quarks are to be detected, a few of them should escape hitting their opposites. Says MIT's Robert Jaffe, who has also done work on strange matter, "It's like flinging two bicycles together and expecting to find all the chain links fly off in the same direction."